The prime minister in a message to Asian Lite News said he would like to send his very best wishes to everyone observing the holy month of Ramadan. 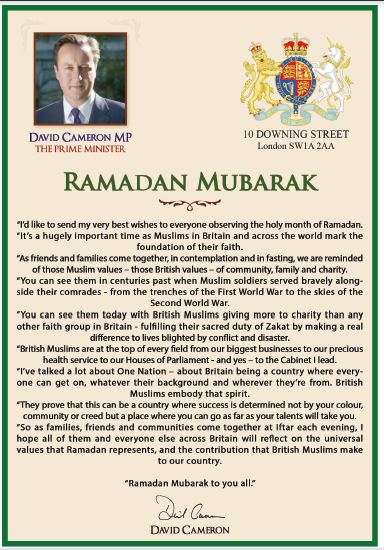 “It’s a hugely important time as Muslims in Britain and across the world mark the foundation of their faith,” Cameron said. “As friends and families come together, in contemplation and in fasting, we are reminded of those Muslim values – those British values – of community, family and charity.

“You can see them in centuries past when Muslim soldiers served bravely alongside their comrades – from the trenches of the First World War to the skies of the Second World War.

“You can see them today with British Muslims giving more to charity than any other faith group in Britain – fulfilling their sacred duty of Zakat by making a real difference to lives blighted by conflict and disaster.

“British Muslims are at the top of every field from our biggest businesses to our precious health service to our Houses of Parliament – and yes – to the Cabinet I lead.

“I’ve talked a lot about One Nation – about Britain being a country where everyone can get on, whatever their background and wherever they’re from. British Muslims embody that spirit. They prove that this can be a country where success is determined not by your colour, community or creed but a place where you can go as far as your talents will take you.

“So as families, friends and communities come together at Iftar each evening, I hope all of them and everyone else across Britain will reflect on the universal values that Ramadan represents, and the contribution that British Muslims make to our country.

“Ramadan Mubarak to you all.”