Former Labour leader Ed Miliband returns to rekindle the spirit of Brexit debate in and outside the Parliament. He challenged the Brexit Minister David Davis in the Parliament with a valid question and begins talks with like-minded politicians to halt the government from hard Brexit….reports Asian Lite News 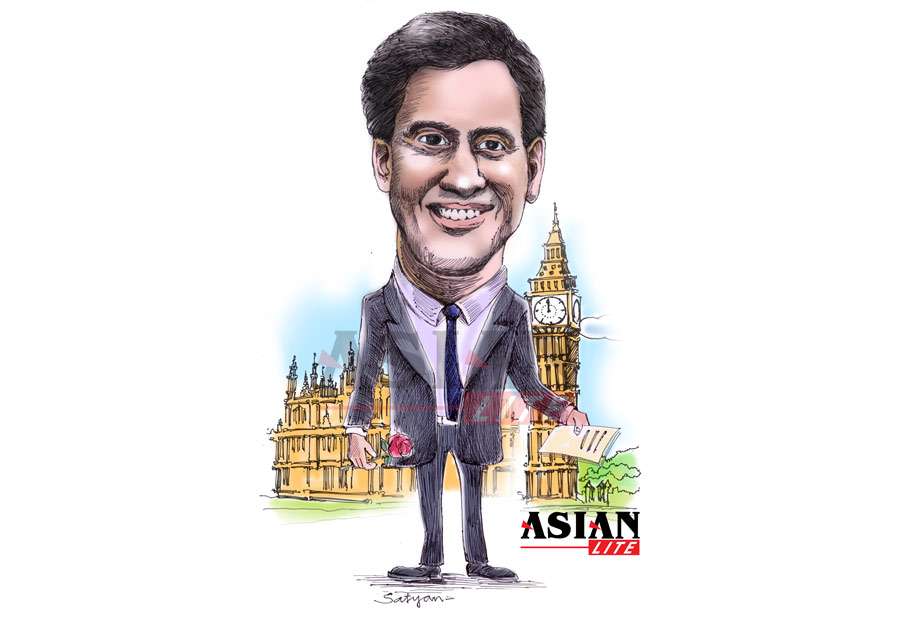 The former Labour leader is getting support from former deputy prime minister Nick Clegg. Several pro-EU Tory MPs joined the platform along with Liberal Democrats, the SNP and Greens to insist that parliament have a say and a vote on hard Brexit.

They argued while the British people had backed leaving the EU, they had not chosen to leave the biggest trading market in the western world.

Mr Miliband is planning to table a motion seeking Prime Minister Theresa May to explain the role of Parliament in Brexit decisions.

The SNP and pro-EU Tory MPs Nicky Morgan and Anna Soubry were also considering tabling questions, while former Lib Dem leader Nick Clegg, now the party’s Brexit spokesman, said it would be appalling if detailed terms of Brexit, including the UK’s future relations with the single market, were not voted on by MPs.

Miliband told the Observer: “Having claimed that the referendum was about returning sovereignty to Britain, it would be a complete outrage if May were to determine the terms of Brexit without a mandate from parliament.

“There is no mandate for hard Brexit, and I don’t believe there is a majority in parliament for [it] either. Given the importance of these decisions for the UK economy … it has to be a matter for MPs.”

The cross-party alliance was formed since ministers made a succession of speeches at the Tory party conference in Birmingham last week, which left the clear impression they would press ahead with a hard Brexit. The suggestion was that this would mean leaving the single market if that was the cost of regaining control of the UK’s borders.

Mr Miliband faced off with David Davis during a debate over the powers of parliament in Brexit negotiations, accusing the minister of hypocrisy.

“As someone who for many years railed about the importance of the powers of backbenchers and parliament against the executive, can he give us now with a straight face an answer to the question where is the government’s mandate for its negotiations, either for this house or the country?”, he said.

On the Victoria Derbyshire show Miliband denied he was seeking to reverse the result of the referendum but said he had become alarmed by talk of a “hard Brexit”, which could mean the UK no longer has access to the single market.

In the interview, Miliband also said he believed parliament should have a vote on the terms of Brexit. “There’s no mandate for a huge separation from the single market, a hard Brexit, I don’t believe, and that’s why Parliament has to be consulted,” he said.

Concern has also grown after business leaders, led by the Confederation of British Industry and EEF , wrote an open letter to the prime minister, warning that a hard Brexit that failed to secure a close relationship with the single market should be ruled out “under any circumstances”.

The letter says the terms on which the UK leaves the EU will be critical to the UK economy, jobs and future investment, while resorting to World Trade Organisation (WTO) rules would leave 90% of UK trading in goods subject to new tariffs. This would mean an additional 20% in extra costs for the UK’s food and drink industry and 10% for car producers.

“We respect the result of the referendum, but the government must make sure that the terms of the deal to leave ensure stability, prosperity and improved living standards,” the business groups say.
MPs demanding a vote point out that the 2015 Tory manifesto made explicit that, while there would be an in/out referendum, membership of the single market would still be in the country’s best economic interests. The manifesto said “We say: ‘Yes to the single market’”, and that the party would safeguard the country’s interests within it.

May has only said there will be a vote on a repeal bill to remove the 1972 act from the statute book, and that parliament will be kept informed when possible on negotiations on the detailed terms. But there is no prospect of a vote on what form Brexit will take, nor the terms.