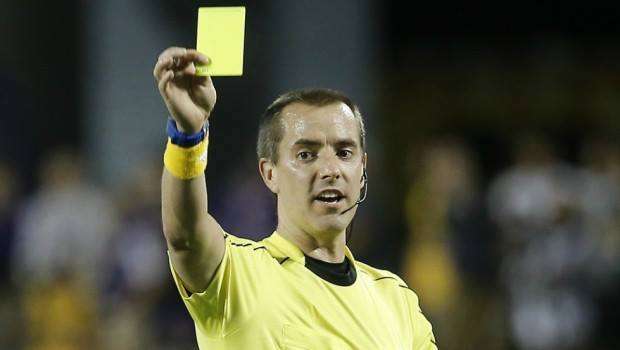 As England edged past Colombia 4-3 on penalties to qualify for the quarter-finals of the FIFA World Cup, the performance of referee Mark Geiger was the biggest talking point of the round-of-16 tie… reports Asian Lite News 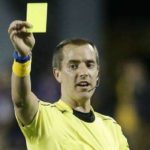 Besides issuing as many as eight yellow cards throughout the game which was locked 1-1 after regulation time, referee Geiger failed to control the hotly-contested fixture which at times resembled a fist-fight.

The game first turned ugly when Colombia’s Juan Cuadrado shoulder barged Liverpool captain Jordan Henderson, infuriating the England midfielder in a spat that would rumble on throughout.

Henderson was at the receiving end again when Colombia midfielder Wilmar Barrios appeared to aim a tame-yet-deliberate headbutt into the Englishman’s chest, adding a second touch towards his neck for good measure.

England players appealed vehemently for a red card which a headbutt warrants. The substitutes and backroom staff in the dug-out also protested to the fourth official on the sideline.

He clearly spoke to Geiger over their communications system, while the intervention of the Video Assistant Referee (VAR) was also a possibility, but despite the incident being clearly seen by television cameras, Barrios was shown only a yellow card.

“Yellow card for a headbutt. You have to be kidding,” former England striker Gary Linekar tweeted moments after the incident.

Former English Premier League referee Mark Clattenburg, according to www.express.co.uk, feels Barrios should have been sent off.

“Clearly England are not getting any justice with the VAR system,” he said on ITV.

“What you can see from this footage is that the defender has put his head into Jordan Henderson’s chest, therefore I think this is a yellow card.

“But what I then do see is the movement up with his head and that is clearly violent conduct because he know what he’s doing and this is a pre-meditated act.”

Clattenburg added that VAR should have told the on-field referee to review the incident on the side of the pitch.

“The referee’s on the pitch, he’s got the temperature, the feeling,” he added.

The second half continued in similar vein when Geiger awarded England a penalty in the 54th minute.

Kane was hacked down by Colombia defender Carlos Sanchez, but a fierce protest from the South American side delayed Kane’s penalty effort for a total of three minutes and 26 seconds as Geiger failed to get the house in order.

The anger between the players continued and what followed was a stream of bookings – seven in total by the end of normal time – with Falcao, Barrios, and Sanchez all lucky to remain on the pitch as well as Jesse Lingard, given he appeared to dive shortly after being shown a yellow card.

“Don’t understand why referees put up with the in-your-face abuse. Give them yellow cards and stop the nonsense,” Linekar wrote on Twitter underlining Geiger’s meek surrender on occasions where he should have dictated terms.