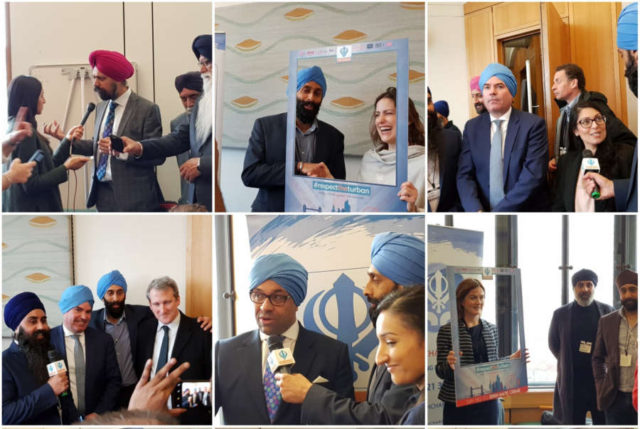 Some Reflections on the launch of Respect the Sikh Turban Campaign at the UK Parliament on 27th March….writes Charan Kanwal Singh Sekhon (UK) 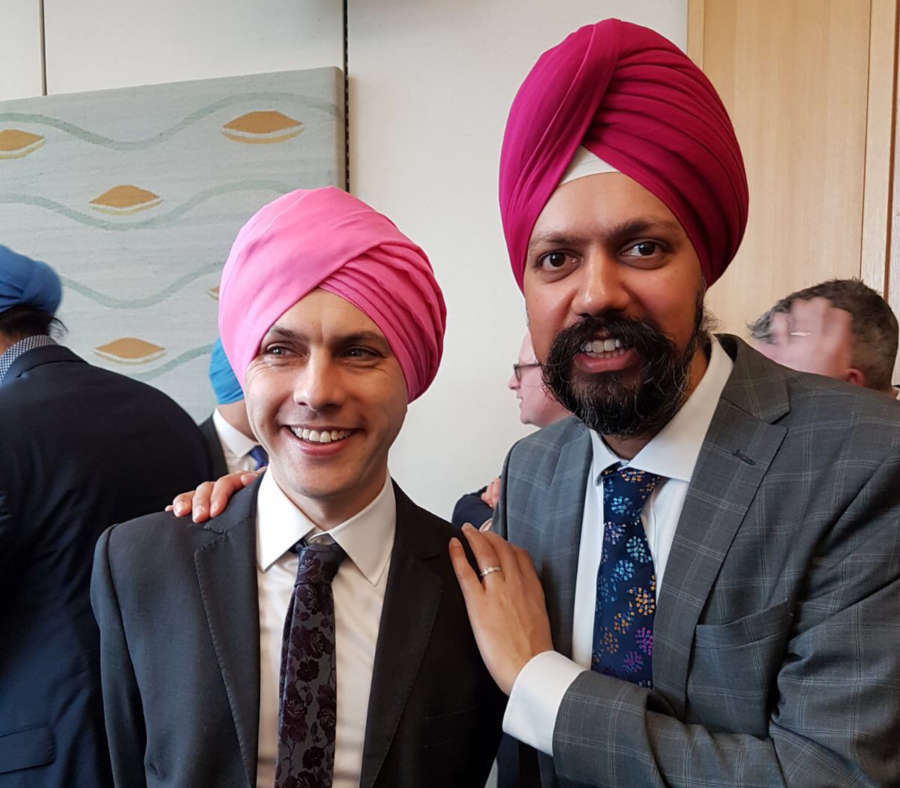 It was truly shocking for me and the whole Sikh community when a man attempted to remove Ravneet Singh’s turban outside the UK Parliament and shouted “Muslim go back”. Ravneet made a special visit from Punjab was waiting in the queue as he had a meeting with MP Tanmanjeet Singh Dhesi. This clearly shows that some people in the western countries do not know the difference between Sikhs and Muslims.
Turban is worn by many other communities and sects around the globe (varies sects among Muslims in many countries, Hindu communities in India including Jaats, Rajpoots, Vanjara communities and many tribal communities in India and other Asian & Arabic countries) but the only religion that made it compulsory is the Sikh religion. Shia Muslims, who also regard turban-wearing as Sunnah Mu’akkadah (confirmed tradition) but keeping uncut hair and cover it with Turban is a unique and an integral part of Sikh religion.
Someone removing the turban is totally unacceptable to all Sikhs. For me my turban is not just a piece of cloth or just an article of faith, it has an immense spiritual, temporal significance and all the Sikhs regard it as a Sikh Crown gifted by the founders of the Sikh faith. The turban has been an integral part of the Sikh Tradition since the time of Guru Nanak Dev. 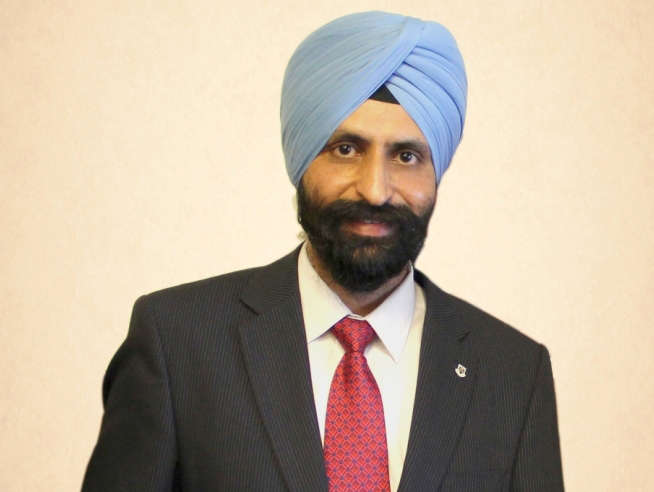 I work for UK Government’s environmental regulatory body and often visit Government offices. Outside work I am a local councillor and heavily involved in community and charity work through SEVA Trust UK (an international charity working in the UK and India on Education, Environment and Health) and I visit the UK Parliament quite regularly for meetings and events. I have uncut beard and proudly wear a Turban. It never occurred to me that such incident could take place in front of the UK Parliament where we have turban wearing Lords, MP and Sikh staff members working at the Parliament.
UK has excellent race relations and equality laws. I live in an area where 99.9% residents are of white British background. I find the British people very friendly, helpful and welcoming though there are always small number of people in each society who do not represent the views of wider communities. Overall, the UK is a very diverse country that promotes and defends equality, diversity and fairness for all.
Though hate crime of this nature against any turban wearing or any person is unacceptable, but this incident triggered the need among the UK and the Sikhs living worldwide to try to educate others regarding the significance and importance of the Sikh turban. Hate crime against Sikhs in the western countries went up significantly after 9/11 attacks. In the UK we have witnessed Islamic terrorists killing and harming so many innocent people and trying to spread hate and fear. As per UK Government’s own findings, some Islamic organisations and religious groups have failed to stop hate spreading propaganda in their main institutions. Preaching hate or separatism against any country, people or religion is not acceptable and such elements need to be tackled. 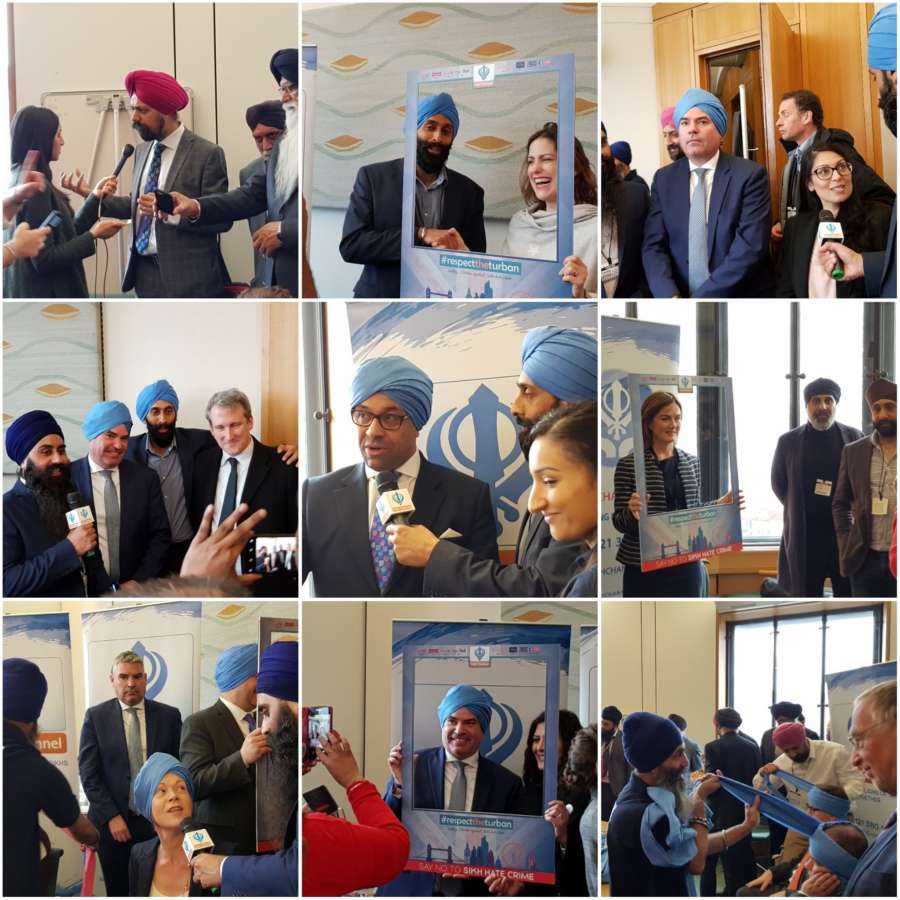 When western people see various Islamic terrorists or Talibans in turbans, some of them do not understand difference between the Sikhs and Muslims.
Having actively involved in the British public and community life for over 20 years, I strongly feel that positive campaigns of this nature help to raise the real issues and bring people closer. Many UK Government Ministers and senior members of all political parties and the wider British public and community organisations have commended the positive and peaceful reaction by the Sikhs to above incident in form of raising awareness. Sikhism is all about tolerance, equality, peace, love and harmony. Turban wearing Sikh Soldiers fought for freedom and peace in both world wars, Sikh Gurus stood up to defend their motherland, fought against oppression and injustice and preached love and peace. They stood up against forceful conversation of religion by Islamic rulers of India and scarified themselves for peace and freedom for all Indians not just the Sikhs.
The Sikh Turban Awareness day at the Parliament has attracted huge interest from very senior politician of all parties, MPs, Lords, Ministers who not only wore Sikh Turbans themselves but emphasised that Sikhs are peace loving and an internal part of the UK communities who are playing leading role in UK’s progression, economy, public & community life and their amazing generosity for others and the charity work. This event has already attracted huge media and public interest. This clearly shows how hate could be turned into a positive campaign through peace and love, in line with the guidance and the true values the Sikh Gurus gave the world.
I would like to express my sincere gratitude and appreciation to our first Turban wearing MP Tanmanjeet Singh Dhesi for his enormous efforts and input and all the other Parliamentarians, the Sikh Channel, all the organisers of this campaign and the media for their positive support. I very much hope that all the British communities’ especially our Youth take positives out of the above peaceful awareness campaign that shows peaceful and measured approach results positive impact and the path of hate, revenge or violence takes us nowhere.
Last but not least I would like to thank Ravneet Singh for his determination, tolerance and for this peaceful campaign on this issue. His unique seva for humanity through the services provided by all the Eco Sikh volunteers, is an example of true Sikhi that is love, peace, serving others and respecting the nature and protecting the environment.