An Influential  musician whose body of work spans everything from playing for The Stone Roses and Ian Brown to staging symphonies, is being recognised by the University of Salford.

Aziz Ibrahim, who grew up on a council estate in Longsight, is being honoured for his commitment to strengthening communities through music and will receive an honorary Doctor of Arts degree during a ceremony at The Lowry on Thursday July 19.

Aziz said: “I believe that music requires no passports and is one of humanity’s best mediums for understanding, co-operation and unification.”

Aziz is committed to a wide range of charitable projects including providing guitar and mentoring sessions for a prisoner re-integration programme at HMP Risley, music therapy for hospice patients, performances in homeless shelters for the charity Crisis and refugee centres in Toxteth through the Red Cross.

A passionate supporter of music education initiatives, The British Council selected Aziz as a featured artist and guest lecturer on tours and workshops focused on developing aspiring young musicians from predominately Arab and South Asian countries. This culminated in an invitation to Buckingham Palace from HM The Queen for his contribution to the culture and economy of the country. 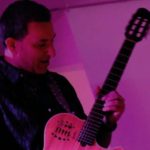 His contributions in music education are many, including BBC Introducing masterclasses and a masterclass series presented at universities both abroad and in the UK including the University of Salford.

“He is a role model for our students in that he is a working musician who understands deeply the need to educate and engage young people in cultural activities for the benefit of society.”Dr Kirsty Fairclough, Associate Dean of the University’s School of Arts and Media, said

Aziz’s collaboration with the Manchester Camerata, charting his father’s journey From Lahore To Longsight, is touring internationally later in the year, with Aziz providing opportunities for Salford students to work on the tour.

His current initiative Project71 DesiGuitR supported by Arts Council England and the University of Salford brings music/digital to unconventional and cultural spaces like museums, art galleries and libraries and addresses the relevance of these establishments to surrounding communities and generations.

“Aziz has already made a vast contribution to local and national culture with his extraordinary musical career, yet he remains passionate about giving back to the community and working with young musicians across Greater Manchester. We look forward to working more closely with Aziz in the future and it’s a real privilege to be able to honour him in this way.”Dr Fairclough said.