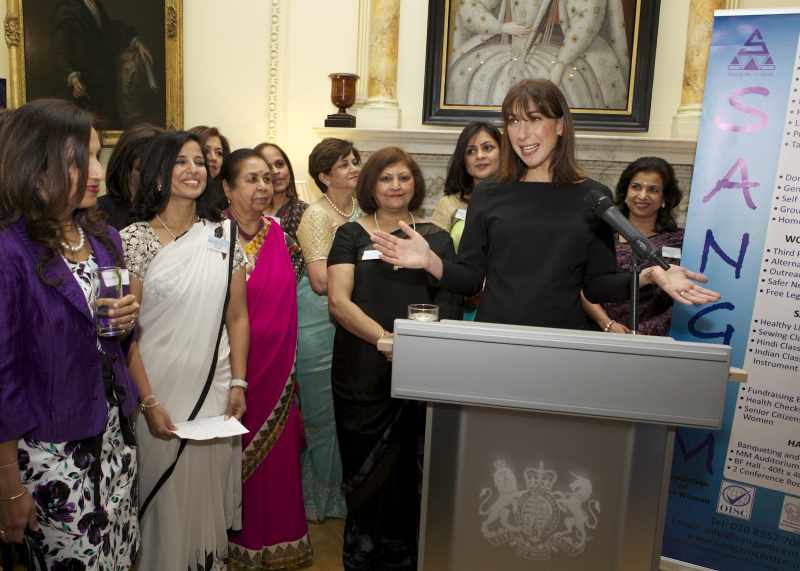 Samantha Cameron praised the “remarkable” and “amazing” charity the Sangam Association of Asian Women at a Downing Street reception.
The Prime Minister’s wife welcomed over 100 guests on behalf of the pioneering Barnet-based charity and praised the way the charity has evolved over the past four decades.
Speaking at the event, Mrs Cameron said “I first heard about Sangam last year and I was moved by the amazing history of a charity originally established in the 1970s by Asian women for Asian women who were having difficulties in integrating into their new environment.
“Sangam hasn’t been afraid to address difficult issues like poverty and domestic violence. It has continued to empower and support women and it is fantastic that you have been recognised so widely. I wanted to invite you here today to commend the work that the team at Sangam do and to thank all of you for supporting Sangam. It is a remarkable charity and long may it continue its work for the people and people of Barnet.”
Speaking on behalf of the charity, Sangam President Nimmi Saraf said in her response “I’d like to give my heartiest thanks to Mrs Cameron for her kind words and for inviting us into her beautiful home. Sangam has changed a great deal in our 42 years of existence, yet our values and principles have never wavered. Sangam’s doors are open to all, regardless of race, gender or disability.
“We help over 3,000 clients a year and the impact we have on our local community and wider society resonates in their voices. I hope today is also a moment when we can also look to the future. The challenges facing our community and our charity are changing; Barnet has become more diverse and the types of assistance needed are even more challenging. But with the support of our community and with the continued dedication of our team, I know that we can meet those challenges.”
Sangam recently celebrated its fortieth anniversary and over those four decades it has expanded and evolved its role to match the community around it. Its purpose built centre was opened by HRH Princess Diana in 1991, giving a home to the full range of services that Sangam provides.
The reception is the latest in a long-line of honours and achievements for Sangam, including winning the Queen’s Award for Voluntary Services in 2006. Attendees at last night’s event included Sangam’s Patron Lord Bagri OBE and his wife Lady Bagri, Lord & Lady Popat and the Directors and volunteers who help to manage Sangam’s activities.
The Sangam Association of Asian Women was founded in 1971 as a result of the large influx of immigrants from South Asia and East Africa in the sixties and seventies. The lack of both language proficiency and understanding of the systems of Government left many vulnerable Asians feeling helpless and often with nowhere to turn.
Richa Karnani, Samantha Cameron, Pankhuri Bhandari, Sudha Sanghani, Rupa Mistry, Varsha Dahad, Jyoti Shah, Piyusha Virani, Nimmi Saraf were seen at the event.