The event at Swami Narayan Temple, Stanmore to host Dattatreyaji Hosabale, member of RSS National Executive and founder of World Organisation of Students and Youth which works with students from foreign countries studying in India.

After a welcome by Nilesh Solanki, head of PR, HSSUK, a video was shown on the work of the Sangh and how various national leaders and prominent personalities held its work in high esteem and hope.

Present on the occasion were Dr Ram Vaidya and Dhiraj Shah, President of HSSUK, who made valuable contributions to Sangh work both in Kenya and the UK, and was instrumental in the formation of organisations such as Overseas Friends of BJP, NHSF and Sewa International (UK). Hosabale spoke about Sangh and its service activities during natural disasters in different places. Answering questions raised by the audience during the Q & A session, he clarified the work being done in North Eastern states of India, Kashmir etc and how members of other communities are recognising its work philosophy. 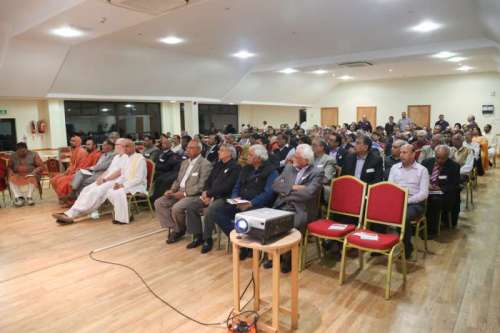