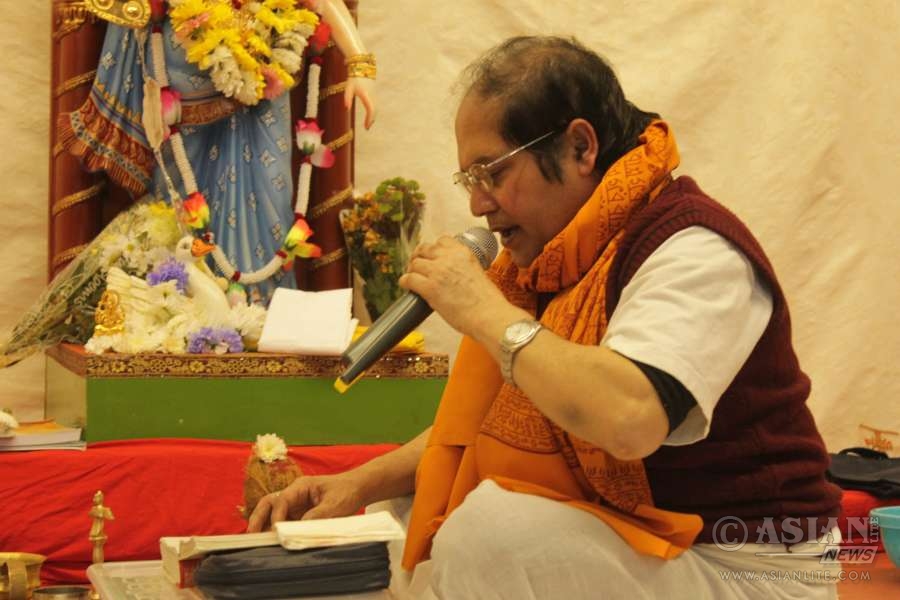 The Goddess of education and culture was evoked on this day in special prayers by those Indians who were living away from the splendour of the celebrations back home. Almost a hundred members of the Indian community as well as non members turned up for the event.

The Puja lasted for about an hour with the priest reciting Sanskrit chants and verses, the Aarati or the offering to the Goddess and lastly culminating with the Anjali where the people offered flowers to the Goddess and wished for their success and welfare in life.

The Bhog or the food offering consisted of various fruits, Khichdi, Daal, Sweets and Payesh (Rice pudding). This was later given out to the guests as Prasaad during lunch.

This Puja hosted by the Indian Community saw the coming together of many Indians who could leave their busy schedules for a day and enjoy the warmth of their own culture. Life in Manchester is so busy and fast moving that sometimes a break is needed. This Puja became a get together of sorts which provided that much needed break. In fact, people in small groups could be seen clicking selfies and photographs, talking about their life in Manchester, meeting old friends after a long time and managing the children. Amidst such a get together the entire scene was elevated with the Bhajans sung by the members of the community.

Saraswati Puja is a part of the Indian culture and to uphold that essence and the feeling of togetherness in Manchester is an achievement on the part of the celebrations of this community. It only makes the bond between Indians grow stronger.