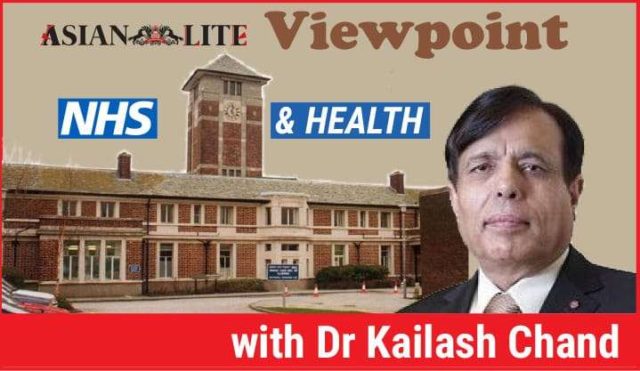 My real worry is a more right-wing government would use a workforce crisis following Brexit with no deal, compounded by the NHS funding crisis, to tell the British public that a free universal health care is not affordable, and wash its hands of the NHS…writes Dr Kailash Chand

I welcome Labour leader Jeremy Corbyn’s  revised position on Brexit. “Labour will “do everything we can to take no deal off the table or stop a damaging deal of the sort Hunt or Johnson propose”. A no-deal Brexit threatens the very existence of the NHS.

The UK will cease to be a member of the EU on 31th Oct 2019 if either Boris Johnson or Jeremy Hunt are the Prime Minister. Forty years of accumulated legislation and regulations will no longer apply.

It is increasingly clear that failure to reach a deal with the EU on the terms of Brexit would be a disaster for the NHS. The repercussions of a no-deal Brexit could be so catastrophic as to destabilise the NHS to the point of disintegration.

Patients with rare diseases could lose access to European Reference Networks. Elderly British residents in countries such as Spain may decide to return, placing demands on an already over-burdened general practice and social care system. There would be no basis for recognition of medical qualifications obtained in the EU. Pharmaceutical companies would have to seek separate authorisation to market their products in the UK and EU.

A vacuum of political oversight following a no-deal Brexit could lead to further moves to reduce access, safety and quality

Leaving the EU with no deal has far-reaching implications for general practice too. A large percentage of the workforce consists of non-UK qualified GPs – over a fifth of the workforce of the GP workforce is from the EEA and elsewhere – and research has shown these GPs tend to work longer hours, are older and serve more deprived areas than their UK counterparts. Brexit with no deal, or indeed a hard Brexit, would exaggerate the recruitment and retention crisis and threaten the delivery of care, particularly in deprived areas.  Since the referendum the number of foreign EU nationals joining the NHS has plummeted from 2,500 to 200 a quarter, NHS Digital statistics show.

Furthermore, faced with a collapsing economy and an NHS struggling to control increasing demands, the treasury may lose patience and take an even firmer grip on the services’ finances. If the economy nose dives as predicted with no-deal Brexit, the chancellor of a new administration could even seek to end the service’s (already leaking) funding ‘ring-fence’.

More importantly, a vacuum of political oversight following a no-deal Brexit could lead to further moves to reduce access, safety and quality of patient care. Most of the CCGs in England are already quietly outlining plans to close and downscale local services across the country, and withdraw a wide range of treatments from the NHS, from hearing aids to IVF treatment and hip replacements.

The repercussions of Brexit with leadership of the likes of Boris Johnson and Jeremy Hunt could be so catastrophic as to reduce the NHS to a skeleton service offering poor quality ‘emergency services’ only.  Boris Johnson has told us that ‘if people have to pay for NHS services, they will value them more’. Hunt as health secretary stayed true to the conviction he stated in a book he co-authored with Oliver Letwin MP, about finishing off the NHS to replace it with US-style insurance system.

My real worry is a more right-wing government would use a workforce crisis following Brexit with no deal, compounded by the NHS funding crisis, to tell the British public that a free universal health care is not affordable, and wash its hands of the NHS.