What is the link between Britain’s cotton capital Manchester and Punjab? With 100 years difference, both witnessed a brutal massacre by armed guards.  Her Majesty’s troops butchered unarmed protesters on 16th August, 1819 at Peterloo in Manchester. Her Majesty’s General Dyer ordered to shoot unarmed protesters on April 13, 1919 at  Jallianwala Bagh in Punjab. Were massacres the only method of governance known to British rulers?….Explores Asian Lite’s Suditi Jindal in Manchester

As I entered the last leg of my stay in the U.K. for this year, I reached Manchester. I was to put up in the house of a loving family of relatives who guided me regarding the local public transport and the areas of interest for a tourist. I decided to explore the city on my own, and the best place to begin was the city centre. It so transpired that the editor of my newspaper, also wanted to meet me on the same day. He told me that the office of the newspaper is in a building called ‘Peter House’, which is located in St. Peter’s Square, a part of the city centre itself. I looked up Google maps to trace my way through the proposed itinerary, paying no heed to the name St. Peter’s Square when no church with a related name, existed in the area.

The meeting went on well, as ordinary meetings do. But then my editor asked if I knew about the Peterloo Massacre. I had assumed that the only significance for the word ‘Peter’ was its association with a Christian clergyman. I was asked to turn a few pages of history and find what I could.

As I typed in my search query on Google, a host of links showed up for St. Peter’s Square in Manchester. Most of them made a passing reference to an ancient church in a couple of sentences, but talked at length about the Peterloo Massacre. As I read further, I was drawn in by the similarity of the event with another massacre perpetrated by the British forces, a century later, in my country India: the Jallianwala Bagh Massacre.

Both the massacres have numerous points of similitude. Peterloo massacre was, like the Jallianwala Bagh massacre, an armed attack by British army on a peaceful gathering of population on 16th August, 1819. People from neighbouring as well as local areas, had converged to St. Peter’s Square in ‘their Sunday best’ to protest against repressive and discriminatory laws of governance that harmed especially the textile workers. Their plight was further worsened by the ‘Corn Laws’ that made bread dearer. The economy and the general population had been struggling with economic depression resulting from the Napoleonic Wars. The common public wanted more say in the governance and hence, decided to peacefully protest for suffrage and representation in the parliament.

People were also lured by the prospect of listening to a famous radical orator Henry Hunt. The non-violent gathering of around 100,000 men, women, and children in St. Peter’s Square, was attacked by a local force of voluntary soldiers called Manchester Yeomanry, and 16 people, including a child of two, were killed; lesser than those slayed in Jallianwala Bagh Massacre. There is a memorial at site in Jallianwala Bagh to remember the martyrs. Nothing visible in Manchester – except a small plaque. A blue plaque is sited on the wall of the Radisson Hotel, the Free Trade Hall as was, and is the only memorial in the vicinity of St Peter’s Square. I was crying when I saw the small plaque on a huge wall. Are we paying enough due to our martyrs? They sacrificed their life for the freedom we enjoy now. 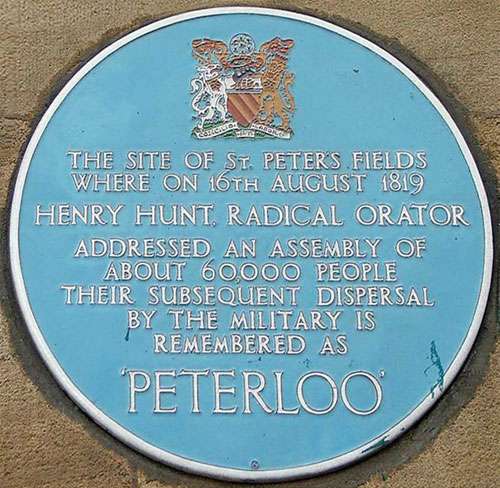 On 13th April, 1919, Brigadier General Reginald Edward Harry Dyer had ordered his armed men to seal off the only exit in the walled garden in Amritsar city, where 10,000 men, women, and children had collected to celebrate the festival of Baisakhi. Some of these might have been those who had come to talk about and listen to speeches of Indian leaders about the repressive Rowlatt Acts and the arrest of freedom fighters in other cities of Punjab, and might thus be defying the government’s order banning public gatherings and meetings. The protestors in India, like those in Britain, were demanding greater political autonomy for the Indians from the British parliament, after the end of the First World War. It was the most heinous atrocity wreaked on common people, when hundreds of rounds of ammunition, till it was not completely exhausted, were fired at unarmed people without warning. The blood-bath that left at least 1,000 people dead including children, and around 1,200 wounded, caused irreparable damage to relations between India and Britain.

These acts of inhuman suppression of voices of dissent by the British, prod me to deduce that the political leadership in the country had always been violent and aggressive in its inherent nature. The ‘planned’ attack on unaware and unarmed populace in Jallianwala Bagh was not an isolated incident in the British regime. The rulers were habitual to ‘murder’, as asserted by the British actor Christopher Eccleston during the anniversary memorial of Peterloo Massacre in Manchester, and use of ‘violence’ to cull any dissention, and they had done so in 1819 in their own country, to their own people.

In such a scenario, it is not inappropriate to expect a proper public apology, as is Mr. Shashi Tharoor’s demand, by the head of the State in the United Kingdom, for the Massacre(s) and other atrocities committed by its predecessors in India.