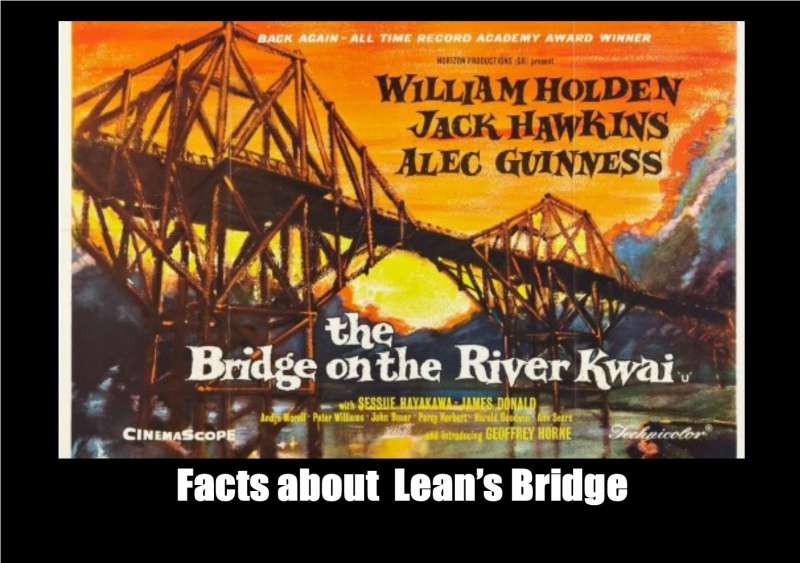 Some of the Second World War’s fiercest battles involved bridges and inspired some riveting accounts – capture of key bridges (Cornelius Ryan’s “The Longest Day”; Stephen Ambrose’s “Pegasus Bridge”), the desperate attempt to capture the Rhine bridges at Arnhem (Ryan’s “A Bridge Too Far”), capture of the intact Ludendorff Bridge (Ken Hechler’s “The Bridge At Remagen”). But the most famous – as far as popular memory is concerned – was the one built by Allied prisoners of war over the river Kwai, but is what we know from the novel and film a fact?

Inspiring the popular novel and the multi-Oscar winning film was ‘Bridge 277’ on Thailand’s Khwae Noi River – of the 415-km-long Japanese Army’s Thailand-Burma Railway, or the “Death Railway” due to the huge toll – over 100,000 — among the over 240,000-strong contingent of Asian civilians and captured Allied personnel forced to build it.

This is recounted in some harrowing memoirs, including “The Forgotten Highlander: My Incredible Story of Survival During the War in the Far East” (2010) by Alistair Urquhart (who also survived a torpedo attack while being taken to Japan, the atom bombing of Nagasaki and is still around at 96), “The Railway Man” (1995) by ex-POW Eric Lomax (also a successful film), and from another perspective: “Long Way Back to the River Kwai: Memories of World War II” by Dutch officer Loet Velmans (who escaped the Germans only to end up a Japanese captive). As far as fiction goes, the 2013 Man Booker winner – “The Narrow Road to the Deep North” by Richard Flanagan, though dealing with another section, shows it still is a source of inspiration.

But “The Bridge over the River Kwai” was a pioneer. An English translation (by Xan Fielding, 1954) of French novelist Pierre Boulle’s “Le Pont de la riviere Kwai” (1952), it deals with a battle of wills between British Lt. Col. Nicholson (not Col.Bogey!) and Japanese POW Camp commandant, Col. Saito, who wants all prisoners, including officers, to work on the bridge and Nicholson opposing it, citing the laws of war.

The British officer is punished but his stubbornness leads Saito to back down. However, Nicholson, a blinkered perfectionist, disparages the Japanese work and switches to see the bridge’s proper construction as a symbol of his “professionalism”. Meanwhile, a commando force, led by a camp inmate who escaped, closes in on a mission of sabotage – but on the verge of completing its mission, runs into the colonel with unexpected results.

In 1957, the novel brought together David Lean and producer Sam Spiegel (and began their partnership) to adapt and transform it into a successful film with Alec Guinness and Sessue Hayakawa in lead roles. Boulle, who didn’t even speak English, went on to win an Oscar for Best Screenplay (giving the shortest acceptance speech: “Merci”) as actual writers Carl Foreman and Michael Wilson were on the Hollywood ‘blacklist’ due to suspected Communist backgrounds.

The film’s success drew sustained criticism – British veterans decried the implication of collaboration and Japanese the slur on their engineering skills!

Boulle had other intentions. Basing his novel on his own experiences as a Free French officer in Southeast Asia as well as accounts of POWs, he sketched a savagely satirical tale of fluid loyalties, absurdities and futility of war. In his memoirs “Aux sources de la riviere Kwai” (1966; “The Source of the River Kwai”, 1967), he noted his targets were his collaborationist compatriots (two Vichy French colonels who accused him of being a traitor!) and based on two incontrovertible facts – that prisoners were made to work and the Japanese, short of personnel themselves, forced captured enemy officers to administer the prison camps.

But what was the truth? It was the antithetical story of a forgotten hero, Brig. Sir Philip Toosey (1904-75), who then a lieutenant colonel, was the senior allied officer in the Japanese POW camp at Tha Maa Kham or Tamarkan (there was a Saito there too but a sergeant-major, not colonel).

Toosey did all he could for his men, facing regular beatings when complaining of their ill-treatment and fostered equality, refusing a separate officers’ mess or accommodation. On the matter of work, he and his officers (including his second-in-command R.G. ‘Reggie’ Lees – the colonel in Flashman creator George McDonald Fraser’s war stories) concluded it was inescapable but did everything possible to delay and sabotage the construction (mixing white ants with the wooden sleepers, badly mixing concrete) without endangering the men.

“The Colonel of Tamarkan: Philip Toosey and The Bridge on the River Kwai” by his eldest grandaughter Julie Summers is not only his biography but also deals with the novel, the film and the veterans’ dismay when the latter became popular and threatened to survive as the actual “history”.

A picture is worth a thousand words but not in this case!