The 19-year-old daughter of a Sikh priest in Punjab province’s Nankana Sahib – the birthplace of Sikhism’s founder Guru Nanak – had gone missing from her house on Tuesday. Later she appeared on a video undergoing a sham marriage ceremony. The controversy triggers dissent in Pakistan…. A special report by Kaswar Klasra

The alleged conversion of a Sikh girl in Pakistan has touched a raw nerve with the minorities and sparked an outcry.

The 19-year-old daughter of a Sikh priest in Punjab province’s Nankana Sahib – the birthplace of Sikhism’s founder Guru Nanak – had gone missing from her house on Tuesday.

The girl, Jagjit Kaur, released a video on Thursday, stating she has married a Muslim man and converted to Islam of her own volition. However, her family alleges an influential Muslim family had kidnapped her on gunpoint.

Enraged over the incident, Pakistan’s Sikh community has set up a 30-member team to take up the issue with the government. Punjab province too has formed a high-powered committee headed by provincial Law Minister Raja Basharat to engage with the Sikhs’ committee.

KISHWAR NAHEED: Forced conversion of girls hailing from minorities, be it Hindus, Christians or Sikhs, isn’t acceptable at any cost. The government of Pakistan as well as millions of Pakistanis must discourage this

That this event unfolded only days before Pakistan is to hold a three-day international Sikh conference starting Saturday adds to the sensitivity of the matter. District Police Officer (DPO) of Nankana Sahib, Faisal Shahzad, informed the Inspector General of Punjab on Friday that they need to act swiftly to pacify the Sikh community lest they disrupt the conference in Lahore.

Shahzad told 101Reporters that the discontent of the minorities is gathering steam. He said he informed the IG that anti-government sentiments were boiling up among the Sikh youth even as the community on a whole was agitating.

Emotions are running high in Nankana Sahib in particular. The Sikhs held sporadic protests across Pakistan to condemn the incident.

Shocking incident of a Sikh girl being kidnapped & forced to convert to Islam in Nankana Sahib, Pakistan. Call upon @ImranKhanPTI to take firm and immediate action against the perpetrators. Request @DrSJaishankar to strongly take up the issue with his counterpart at the earliest. pic.twitter.com/hpHvD9kkEJ

Sultan told 101Reporters the girl was not kidnapped and embraced Islam of her own will. He said her new name is Ayesha and she has started the legal process to change her name in government records. Sultan has filed a writ petition with the Lahore High Court on the girl’s behalf, accusing her family and the local police of harassing her. The petition accompanies a letter from the girl, stating she is an adult and has married and changed religion under no pressure.

The police, on their part, have submitted Kaur’s ‘nikaahnama’ (wedding document) and age proof to the court, confirming her age as 19 years. 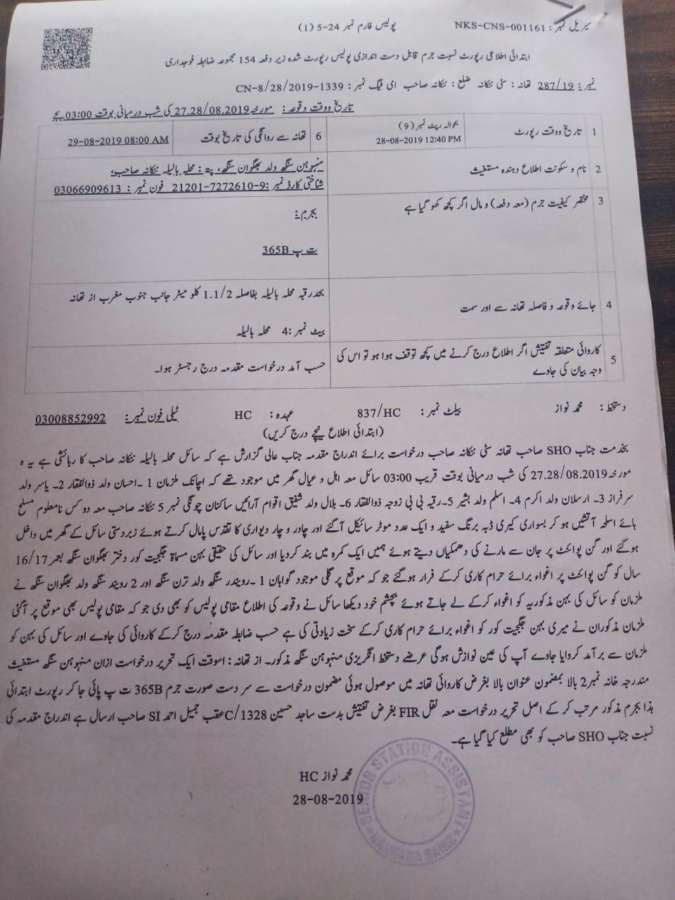 The girl’s family and the Sikh community in Pakistan have been urging the government that she be brought back to her house regardless of whether her conversion was forced or voluntary.

On Thursday, civil society in Pakistan joined the protest. “Forced conversion of girls hailing from minorities, be it Hindus, Christians or Sikhs, isn’t acceptable at any cost. The government of Pakistan as well as millions of Pakistanis must discourage this,” said Kishwar Naheed, a prominent Pakistani poetess and a renowned scholar, over the phone. She has been conferred with Sitara-e-Imtiaz (Star of Excellence), Pakistan’s third highest civilian honour.

Internationally acclaimed Pakistani lawyer Babar Sitar too disapproved of forced conversion. “It’s condemnable. It’s the state’s responsibility to ensure an environment where minorities are free to exercise their religious rights,” he told this correspondent.

On July 5, thousands of Hindus, including women and children, hit the streets in Pakistan’s biggest cities to condemn the kidnapping and forced conversion of young Hindu girls. Large protests were held over the same issue in Kohistan belt comprising parts of Jamshoro and Thatta districts just last Thursday.

Protesters claim that more than 50 girls from minority communities in Pakistan have been kidnapped over the last four months alone. Many believe this is an underhand tactic to drive the Hindus out of Pakistan.

“We need protection. The government must safeguard the rights of Hindus and other minorities. Prime Minister Imran Khan needs to take steps in ensuring our rights before it gets too late,” Hindu activist Bheeko Lal told this correspondent.

In Pakistan, an Islamic republic of about 200 million Muslims, the Hindus make up 1.6 per cent of the population, estimated to be numbering about 3.6 million as per 2018 census.

“We are very worried. We cannot afford sending our young children to India or other countries to avoid forced conversion,” said 46-year-old Sanao Menghwar from Nawab Shah in the Sindh province, where the majority of Pakistan’s Hindus live.

Word on the grapevine is that a Sufi shrine in Sindh province’s Dharki region, Dargah Burchundi Sharif, is at the epicentre of forced conversions. But the custodian of the shrine, Abdul Khaliq Mitha, told 101Reporters there was no truth to these allegations.

He said that while he does arrange the conversion of Hindu girls at the shrine, all these conversions are voluntary. He said these girls want to marry Muslim men and thus embrace Islam. He said he does not send teams to scout girls for conversion. He said many Hindu girls work at his house and the shrine but they have never been forced to adopt Islam.

“We don’t believe in forcing someone to convert,” he stated.

Mitha, a close friend and a spiritual mentor of Prime Minister Khan, said the Hindus are free and entitled to practise their religion in Pakistan and nobody is allowed to disturb them.