Ace Indian-origin artist Tallur, whose works are on display at Saatchi Gallery in London, said: “When one starts to see God in someone else’s ideas or art, that’s when the debate over ‘intolerance’ arises. God must be kept to temples, and art and ideas to their own spaces. It is misunderstanding if one mixes up these spaces.” Bhavana Akella  talks to Tallur 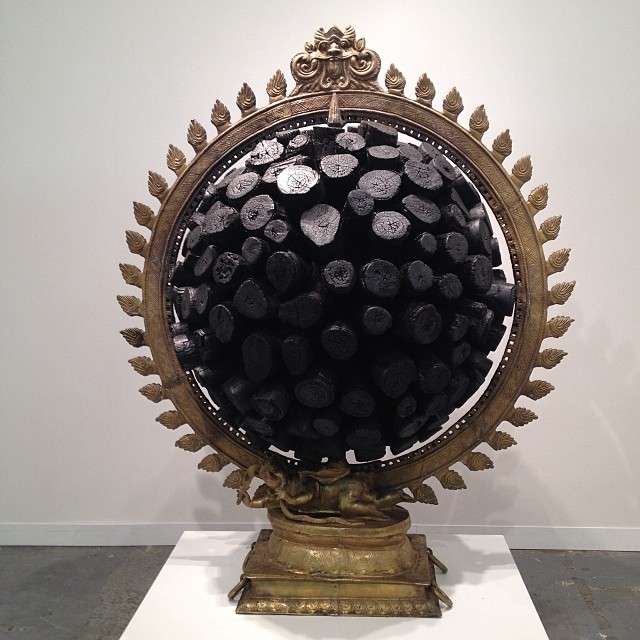 Known for his works with political references, internationally-acclaimed artist L.N. Tallur has traversed around the globe to showcase his talent. He says debates over “intolerance” arise when people mix art and ideas with religion.

Tallur said: “When one starts to see God in someone else’s ideas or art, that’s when the debate over ‘intolerance’ arises. God must be kept to temples, and art and ideas to their own spaces. It is misunderstanding if one mixes up these spaces.”

Tallur, who has under his belt the prestigious Skoda Prize 2012, an award given for excellence in Indian contemporary art, said he identifies himself with those writers and artists who have returned their awards as a show of dissent. The artist, who divides his time in South Korea and India, said the students of the Film and Television Institute of India (FTII), who have been protesting against the appointment of a new director as a move to “saffronise” the institution, have been silenced.

“In Korea if people wear a black badge in their office, the organisation has a respect for their protest and takes the issue up immediately. Whereas in India the FTII protest has been completely dissolved. We Indians are too thick skinned,” he said, referring to the government’s attempts to suppress the protest.

Tallur, who hails from the small town of Kundapura in Karnataka, has a studio there and spends most of his time there when he’s in India. He whips up from there masterpieces of installations, reflecting upon politics and daily life, using the help of traditional craftsmen.

“My inspiration is all from the life. I see something that happens in reality and respond to that through my art,” he said about his artworks which contain the spirit of dissent, irony and contrast that reality holds.

As an artist, he finds technology dear to him in the way it allows him to translate the meaning of his art, he said.

“I ask a classical sandalwood carver and a neo-carver who carves the Buddha to make same-sized sculptures in their own style. And I cut their works and join them together. This technology helps in giving a context and translates the meaning of works,” Tallur explained.

He also makes use of 3D robotic milling technology, where the characteristics of a piece of wood can be transferred into that of a stone.

His piece titled “Milled History” depicts how “history can be rewritten to suit the day’s needs. The art is a perfect mirror of today’s Indian politics,” Tallur said, adding: “Museums are all passport-sized photographs of the country.”

Similarly, his other artwork ‘Veni, Vidi, Vici’ (I came, I saw, I conquered) is made out of terracotta – and reflects upon India’s colonial history.

Tallur, whose works have been a part of the prestigious Kochi-Muziris Biennale, London’s Saatchi Gallery, and numerous other shows across the world, will next be exhibiting at Mumbai’s Nature Morte Gallery in January.