A special report with Video & Gallery – Please send your reactions to newsdesk@asianlite.asianlite.uk –

The major political parties are targeting the British Asians to create a vote bank. Labour enjoyed the support of British-Asians for a quite long time. But the arrival of compassionate central-right Conservative in the form of David Cameron tilted the balance in favour of the Tories….writes Kaliph Anaz. 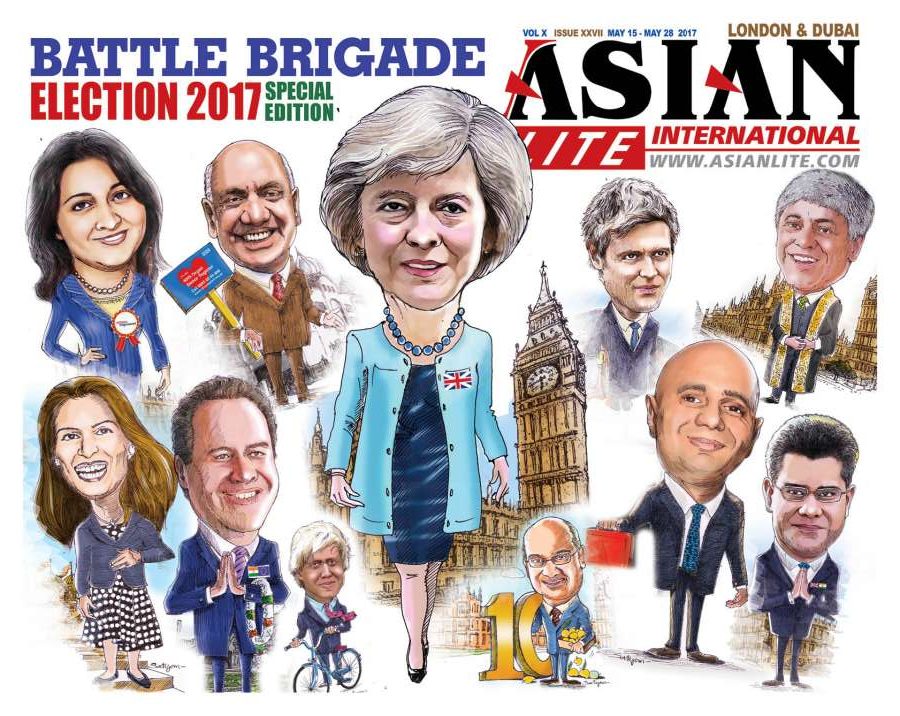 Tories projected themselves as the real protector of Asian values. Tories under Cameron built bridges with the Asian communities. But the arrival of Theresa May at No 10 rocked the relations. Like her strategy for the Brexit deal, the community is still in the dark over her stance on multi-cultural, multi-racial Britain. Despite calls from several quarters, including vice chancellors, to keep the students out of net migration, May is still adamant. That shows this lady is not for turning. But that is costing the universities a revenue loss of over £350 million every year.

Politicians of all hues want Indian/Asian votes, but they won’t reciprocate with due respect. Nobody was there to support the community, when the brown people were humiliated just after the Brexit vote.

Currently around 6% of Members of both Houses are from an ethnic minority background. This compares with 13% of UK population. Cameron was aware about the situation and promised to allocate 20 per cent of the retirement seats of Conservatives to BAME candidates.

The British voters are confused over the campaign agenda. Tories are now the New Labour and fighting for the workers’ rights. The Old Labour fold is now hijacked by Communists and Socialist Worker’s Party and they want to take the country back to 1950s. More taxes, more borrowing, nationalisation, letting the trade unions to take the country hostage by flash strikes and protests. Under Jeremy Corbyn, Labour has become a cult party where the loyalists like Diane Abbot and John McConnel defending the leader’s stance on various issues – ranging from Trident to capital spending.

There is not trust on Liberal Democrats because they betrayed the trust of the people by aligning with the Tories to increase university tuition fees from £3000 to £9000. Tim Farron is struggling to shed the image of Judas.

In the absence of a credible alternative for a stable government, Brown voters will flock to Tories. Then the country will witness a strange cohabitation in the history of British politics. Asians and the UKIP cadres under the same blue umbrella of Tories! And the Tories are promising a fair deal for every one!

“If elected on 8 June, the Conservatives will strike a fairer deal for ordinary working people with a raft of measures including new rights for those who have to leave work to care for family members, or experience child bereavement, a greater stake for workers in their companies, and a commitment to continue increasing the National Living Wage,” the prime minister said.

“I would use Brexit to extend the protections and rights that workers enjoy, and our manifesto will deliver exactly that. Our plans, backed up with strong and stable leadership, will be the greatest expansion in workers’ rights by any Conservative Government in history,” said Mrs May. “By working with business, reducing taxes and dealing with the deficit we have delivered steady improvements to the economic prospects of working people. Now is the time to lock in that economic growth and ensure the proceeds are spread to everyone in our country.

“There is only one leader at this election who will put rights and opportunities for ordinary working families first. The choice next month is clear: economic stability and a better deal for workers under my Conservative team, or chaos under Jeremy Corbyn, whose nonsensical policies would trash the economy and destroy jobs.”

But Corbyn, the seasoned politician knew how to win the Indian votes – especially Indians. He rekindled the memories Operation Blue Star and promised to launch a probe if they came to power. The Labour can promise anything because they are sure that they won’t gain majority. So they are gambling with various socialist ideas like rail, mail and water nationalisation; revoking university tuition fees; putting a spike on austerity drive etc etc. Let’s wait and see the results.

Currently around 6% of Members of both Houses are from an ethnic minority background. This compares with 13% of UK population. Cameron was aware about the situation and promised to allocate 20 per cent of the retirement seats of Conservatives to BAME candidates. He mentioned this during the launch of BAME manifesto at a crowded event at Croydon in 2015. The promise was pushed under carpet when the new boss arrived at No 10.

Commons needs 117 MPs to reflect the proper representation of the BAME communities. The Conservative party has nominated 13 Indian-origin candidates, down from 17 in the 2015 election, while Labour has named 14, the same number as in 2015. Both parties had five Indian-origin MPs in the last Parliament.

The 10 MPs elected in the last parliament may be comfortably placed, but most of the candidates face a stiff challenge given the large margin of victories of rivals in their constituencies. However, Paul Uppal, who lost in Wolverhampton South West in 2015 by 801 votes, is expected to win.

Indian-origin candidates were among the first non-whites to be elected to Parliament — Dadabhai Naoroji was elected from Finsbury Central in 1892, followed by Mancherjee Bhownagree (1895) and Shapurji Shaklatvala (1922). It was only after 1987 that the parliament saw a substantial number of non-whites being elected. The number spiked since the 2010 election — from 27 in 2010 to 41 in 2015. 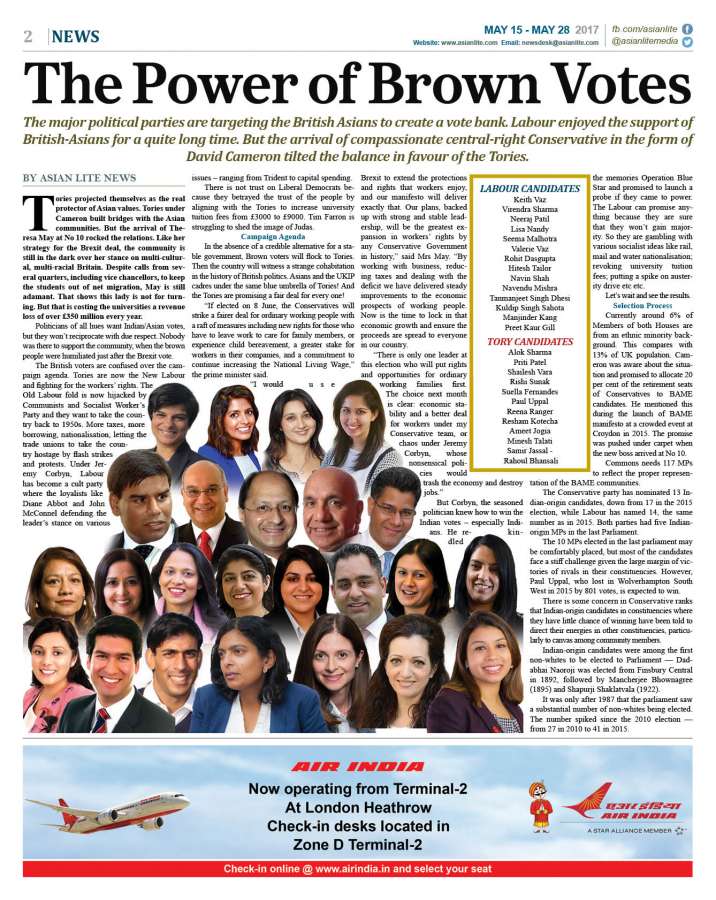