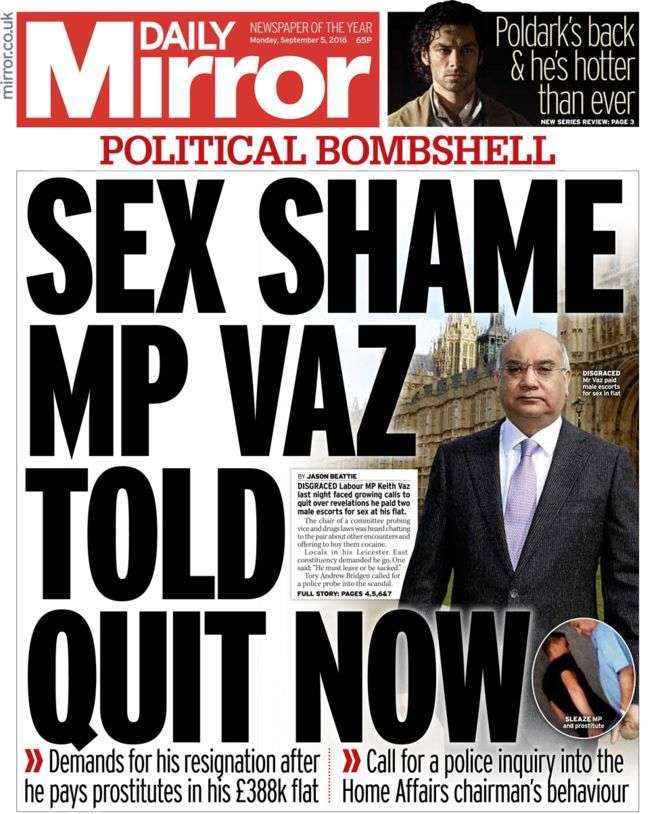 Poor Vaz. This scandal is too big to survive. More than him, the Indian community in Britain will pay the price of the fall of Keith Vaz. He was a role model for budding politicians. But within a day, everything collapsed. Following the Sunday Mirror’s splash, the Daily Mirror said “Sex shame MP told quit now.” The Sunday Mirror alleged that Vaz had paid for male escorts from Eastern Europe.

The newspapers say the scandal is too big for him to survive this time. The Mirror says Vaz is facing growing calls to resign. The paper says the man it calls the “Teflon MP” has “come badly unstuck”.

The Times says  that Mr Vaz is facing an investigation by “parliament’s sleaze watchdog” and has signalled privately that he will step aside as chairman of the home affairs committee, either temporarily or permanently. It also says Mr Vaz as “the great survivor of Labour politics” and “a veteran of parliamentary scandals” and says he started his fight-back by appointing a celebrity lawyer, showing he is “determined to tough it out”.

The Sun focussed on  “the rise and fall of a political Houdini” over 30 years, but, in its editorial, says this “ought to be fatal for his future as an MP”.

The Guardian put Vaz on a single column – but on front page with a headline – “Vaz to leave committee role over sex claims.” The paper says the Labour MP has conceded he will have to relinquish his post as chair of the Commons home affairs select committee.

But Daily Mail was little bit angry with the Labour MP. It screamed “Shameless,”on front page and put the pic of Keith Vaz with his wife.