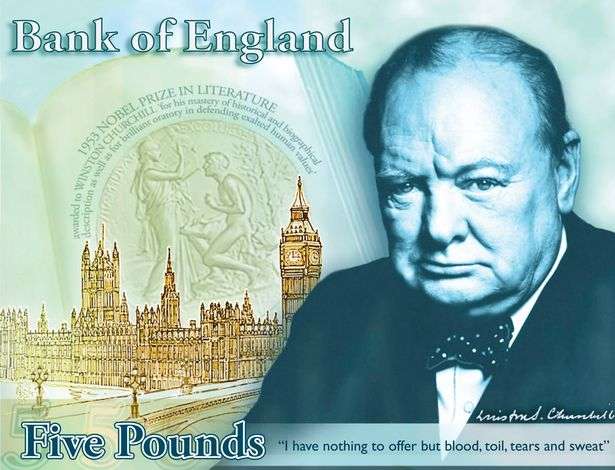 It all started with Bank of England replying to a harmless question on Twitter regarding the makeup of the Five-pound note. The BBC reported the issue on 29th November that the polymer Five Pound note which has been in circulation in the UK for over two months contains traces of tallow. This sparked off indignant comments from Vegans/Vegetarians, mostly Hindus/Sikhs/Jains who felt that their religious views are under attack and their sentiments have not been taken into account, as the currency note, issued by the government as a matter of public service contains animal fat.

Professor David Solomon, the Australian who developed the first polymer bank note in 1988 said those against the note were ‘stupid’. He told the Australian radio station 2GB : ‘It’s stupid. It’s absolutely stupid, There’s trivial amounts of it in there.’ He added that it picks up fewer drugs than paper notes. “ You don’t chop down trees,” he said. “It’s more hygienic than a paper note by a long way.” Thus the Polymer note has several advantages over the paper currency  – decrease in environmental impact and a reduced cost of producers and replacement (it lasts two-and-a-half times longer).

Polymer banknotes are made from a non-fibrous and non-porous polymer. Technically, production of the new £5 note, as well shrink wrapping, cellophane and millions of other everyday items requires a “slip agent”. This is essentially a grease, that prevents the plastic from adhering to things during production and also gives the material its final consistency and appearance. One such consistent and well-proven Slip agent is Tallow. While it may sound gory–to create tallow, animal carcasses are boiled down, then the subjected to pressure in order to extract the fat from bones, skins and connective tissue. The claimed alternative solution – non-animal-based fats such as vegetable oil can also be used. But these have been tried out during the Mad Cow Disease crisis in the 1990s and early 2000s and have not found significant success as it entailed increased expenditure and lacked consistency.

At the time of the introduction of new £5 note the Chief Cashier of the Bank of England said “The New Fiver brings a step change in counterfeit resilience as well as being cleaner and stronger. We have been working extensively with all our stakeholders to ensure a smooth transition to polymer and I look forward to the public being able to use the fantastic new notes from September.” He expressed gratitude to De La Rue, the world’s biggest Currency note manufacturer for their support in the design. The Bank issued the note after due consultation with public in 2013. The new five-pound note he said is stronger, cleaner and safer than its currency version.

Hindu Temples across the UK including the Bhakti Vedanta Manor (ISKCON) have joined the protest by deciding not to accept the polymer note from its devotees who give the Five Pound note as donation. They have stated that it offends their Dharmic faith.” It is a matter of principle “. A 66-year old British café owner in Cambridge refused to accept the new five-pound note due to its animal fat content. The Hindu Forum of Britain has demanded the Bank of England to withdraw the offending note.

Bank of England has not suggested that it would discontinue the production of the Polymer note or withdraw the existing ones. The vegetarian alternative would also involve a change in the process and possibly the machinery. The alternative note may not also contain the security features contained in the present polymer note which is difficult to forge or counterfeit.

The $10 note was the first polymer bank note in circulation in Australia in 1988. Since 1996, Australia has discontinued paper notes completely. While ten countries in the world, notably Canada, New Zealand, Singapore and Kuwait, have switched over completely to polymer bank notes, several other countries have introduced the same in recent days.

To lend balance and proportion to the situation one needs to remind the strict vegans who find it morally offensive to handle a polymer note that quite a few items used in everyday life like Crayons, candles, cosmetics, soaps, toothpaste and several medicines also contain traces of animal fat. These also include leather products such as shoes, belts, gloves, jackets etc.

Finally, the Five-pound note ceased to be a simple medium of exchange but has begun to echo the cannons of 1857 Sepoy Mutiny. The matter has also been reported in several leading dailies in India.

The sane solution appears to be that like all products in the market you are made aware that £5 contains traces of a substance you may not like to inhale, consume or handle. If you do not want to use it for Dharmic purposes simply don’t. But don’t forget it is legal tender and needs to be honoured for all commercial transactions.

Before the controversy erupted a spokesperson for the Bank of England had confirmed polymer £10 notes, will be printed on polymer from Innovia, the supplier of the £5 notes. The contract for polymer £20 note is yet to be given.

In balance the Government should go ahead with the announced timetable of demonetising the £5 note in May 2017, introduce the £10 polymer note in Summer 2017 and the new polymer £20 by 2020. As vegetarians, we have no hesitation in taking the stance that those who are not in favour of Polymerisation of the Currency notes may need to accept it for greater good.