The last few weeks have from some perspectives been like a movie. The difference being the lack of an actual script? If the recent Sunday Times article is anything to go by, it would appear that the government did have a script, but not one that appeared to follow established international practice. Throughout the whole process, the ministers, including the prime minister have deferred their opinion to the experts i.e. Vallance and Whitty (VW). They appear to tell us that herd immunity was the way we were going to deal with reducing emissions and fatalities from coronavirus. However, unlike the VW emissions scandal, they could not hide the data coming out from Spain and Italy that appeared to confirm that herd immunity did not work. But was it Brexit Behaviour that blinded them from the hard reality?

Virus in the distance Sir

With the virus looming on the country, travel and business continued. The initial partial and then full lockdown that came in most of mainland Europe, did not seem to trigger concerns about human behaviour in such a situation. So we carried on, and as cases mounted, advice from the Italian premier did not seem to strike a chord in the UK. Nor did the offer of ventilators or PPE from the EU. The latter provoked a Brexit Behaviour response, with ventilators to be made by British companies e.g. Dyson, in that well known British territory of Malaysia.

Like the car and airline industry, guidelines are used and adhered to rigorously. This has led to great advances in both industries in terms of safety and reliability. The airline industry has been particularly singled out as a beacon of good practice by the UK medical. Perhaps more so after the emissions scandal led by VW. The airline industry’s guidelines are internationally recognised, although the recent Brexit Behaviour has led the UK to withdraw from certain international regulators. This pattern of behaviour appears to have been replicated in healthcare, not only with ventilators, but also with PPE recommendations.

Public Health England and certain parts of the NHS appear to have taken on a more Orwellian approach to managing staff concerns, completely ignoring the World Health Organisation PPE recommendations. Stories of staff being forced to go to the front line with a basic surgical mask, gloves and apron, ignoring WHO guidance for much more body protection. Nor are the stories of staff securing their own better quality PPE, only to be told that they cannot wear it because they cannot guarantee staff safety. With hospitals running out of decent PPE fast, it is not clear whether the government is involved in some bizarre attempt to keep world trade going by importing from Turkey and China and exporting to Germany and further afield. Wasn’t Brexit Behaviour meant that we sourced and manufactured products locally? 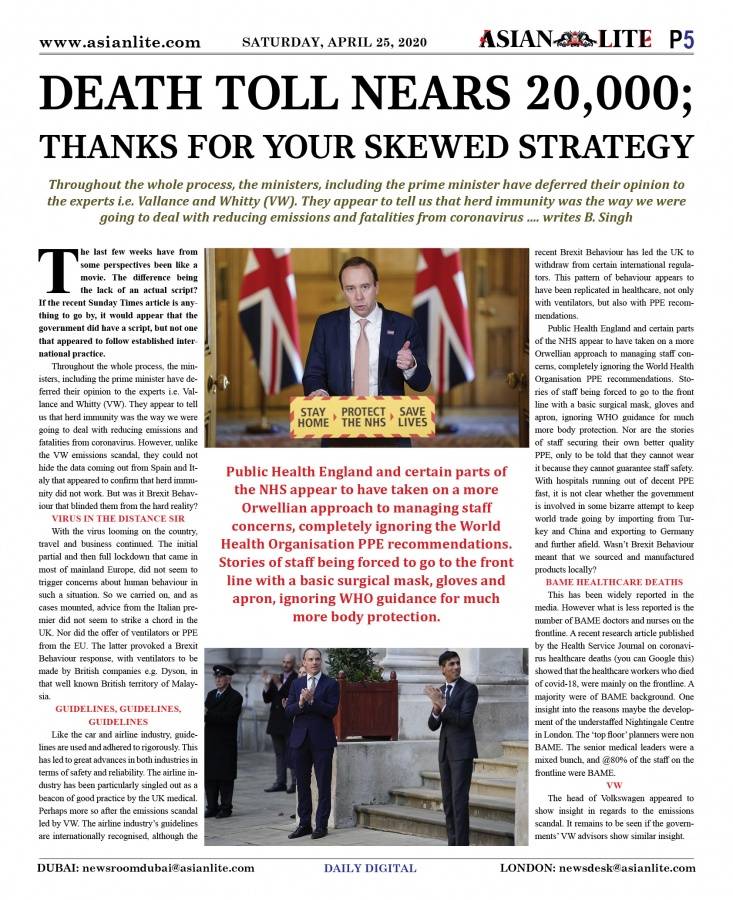 This has been widely reported in the media. However what is less reported is the number of BAME doctors and nurses on the frontline. A recent research article published by the Health Service Journal on coronavirus healthcare deaths (you can Google this) showed that the healthcare workers who died of covid-18, were mainly on the frontline. A majority were of BAME background. One insight into the reasons maybe the development of the understaffed Nightingale Centre in London. The ‘top floor’ planners were non BAME. The senior medical leaders were a mixed bunch, and @80% of the staff on the frontline were BAME.

The head of Volkswagen appeared to show insight in regards to the emissions scandal. It remains to be seen if the governments’ VW advisors show similar insight.