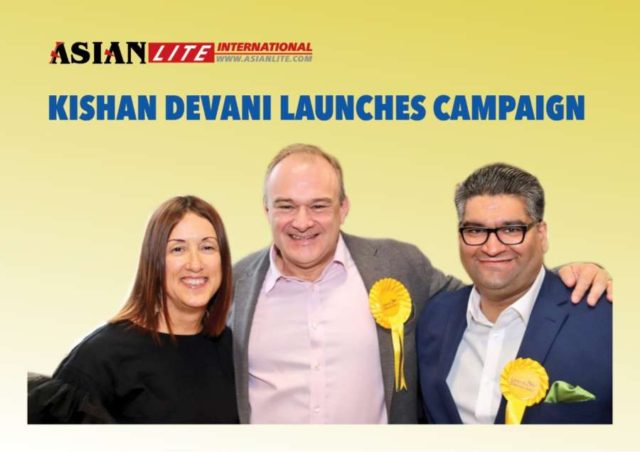 Kishan Devani, who has previously worked in special educational needs schools as well as being Chief Advisor to the World Youth Council and an Ambassador for Religious Education Council of England and Wales said that he was absolutely thrilled to be launching his campaign to take back Montgomeryshire from the Conservatives. “I am especially delighted to do so in the presence of so many new members who have been inspired by recent events to become involved”.

“Now more than ever we need voices in Wales that are willing to stand up and reject the politics of division and rhetoric of warmongering that is deliberately intended to divide our country,” said Jane Dodds MP. “Endorsing Kishan’s selection to fight for the seat she stated In selecting Kishan I know you have selected a fighter, who is willing to put every second of their day into getting out there and listening to local people”.

“You have also selected someone who is incredibly compassionate and caring and has the drive to make sure society is improved for everyone, including giving a voice to those who have so often felt left behind,” she added. “Jane finished her speech by saying that “she looked forward to welcoming Kishan on the Green Benches of Parliament soon, not only as a Liberal Democrat MP, but as an MP willing to provide a strong voice for Wales and rural communities inside Westminster”.

Ed Davey offered his endorsement to Kishan, stating: “He is a tireless campaigner who is willing to put his all into representing the constituency”. He told attendees that “during this election they faced a stark choice, between the chaos of both the Labour and Conservative Parties, or the stability of the Liberal Democrats.

“On the other side of the spectrum you have a Labour Party  run by Corbyn and his small inner circle  betraying the best traditions of the Labour Party, not only to taking it back to the Labour of the 1970s, but an even further far-left version of Labour. Most alarming were the proposals set out in their recent Party Conference that aimed to confiscate 10% of all publicly listed companies in the UK. Effectively making them partial state enterprises and risking ordinary peoples’ pension funds by doing so. This extraordinary attack on private business and enterprise is extremely concerning.

“I never trust someone who makes election promises without stating how they are going to pay for them. Boris Johnson now seems to have taken a leaflet out of Corbyn’s book and found the magical money tree and seems willing to say anything that he thinks will help him in an election, without thinking through how he will accomplish it. It has become clear that they are intending to use the No-Deal Brexit ‘War Chest’ set up by the previous Chancellor to deliver these promises, effectively draining money available to assist with the impacts of a no-deal Brexit”.

Kishan Devani concluded the meeting stating that “people are so tired of our broken politics and deserve so much better than the chaos being sowed by the main two parties. Not only are people fed up on a national level, but they are deeply concerned on a local level with issues such as healthcare, social services, employment and infrastructure being neglected.

“On the doorstep I have met whole families of former lifelong Conservative voters who cannot bring themselves to vote for the Party again following its lurch to the right and abandonment of One-Nation Conservative ideals. For 9 years this constituency has been taken for granted by the Conservatives. They have forgotten how to campaign for improvements to the lives of the constituents in rural communities and instead have become satisfied with preserving the status quo, the people of Montgomeryshire deserve so much better than this and as your candidate I promise to fight every day for the improvements this constituency so desperately needs”.