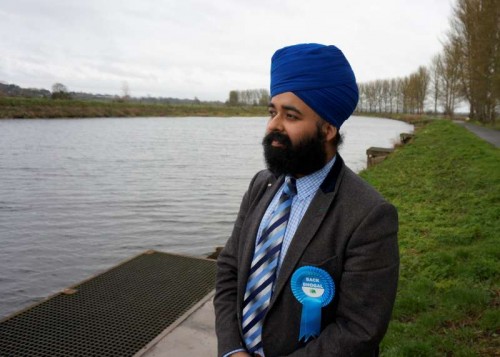 By Amandeep Singh Bhogal, Conservative Candidate for Upper Bann, in Northern IrelandOn May 7, this country will face the most important general election of a generation. The choice is clear: between a competent Conservative Party that is working through a plan to build a brighter future for you, your family and Britain – regardless of where you come from. And the chaos of Labour and the rest who will spend more, borrow more and tax more – taking us back to the dark days of the economic crash.

As a Conservative candidate, I’m relishing the fight. And as Northern Ireland’s first ever Sikh parliamentary candidate, I am taking a new centre-right Tory vision of ‘job counts not head counts’ to the streets of Upper Bann constituency fuelled by an extra dose of optimism. Let me tell you why: it’s because I know we’ve got a great story to tell.

Five years ago, after 13 years of Labour’s socialist mis-rule, our country was in a mess. We were borrowing over £150 billion a year, unemployment had increased by nearly half a million and inequality had reached its widest level in modern times. Today, we’re in a very different place. Ours is the fastest growing major economy. The deficit’s down, jobs are up, we’ve cut income tax for 26 million people, we’ve secured pensioner benefits and living standards are on the rise.

While this is a truly national recovery for all, it’s worth pointing out that BAME employment climbed more than 20 per cent since 2010 – with 278,000 more ethnic Indians, Pakistanis and Bangladeshis in work, enjoying the security that comes from getting paid each month. A quarter of start-up loans helping people set up their own businesses have gone to people from ethnic minority backgrounds.

Out of the record two million high-quality apprenticeships created in the last five years – 83,000 of them have been taken up by Asian people, giving them the skills they need for a good job. At the same time, the number of Asian people going to university and getting good GCSEs has risen by 17 per cent and 10 per cent respectively. That’s tens of thousands more children getting the education they need to reach their full potential. And they’re enjoying the choice of an additional 360 free schools that cater to a range of communities, including the Khalsa Secondary Academy in Buckinghamshire with Sikh ethos. As a father of two and local school governor, I know the value of that.

To me, Labour have taken the ethnic minority vote for granted. Whether it is Labour-run Newham Council closing a much loved Asian community centre or the central Labour party which continues to play vote-bank politics of identity. The Conservatives are now on course to having more ethnic minority MPs than Labour, according to think-tank, British Future.

But ultimately, the fate of this country lies in your hands. On May 7 this is the choice: between the Conservatives who are working to a plan to build a brighter, better and booming Britain. A party that will carry on as it started – creating 2 million more jobs, 3 million more apprenticeships, protecting pensions and giving people control of their own money, investing more in our schools, our transport, our health services and our infrastructure. Or a Labour government, dancing to the tunes of the SNP, meaning more borrowing, more taxes and more debt than our children could ever hope to repay. Together we can – a job for every hand, a roof for every head and prosperity for everybody.