An Indian-origin woman in labour was turned away from a hospital’s maternity unit in Britain – only to give birth 40 minutes later in her mother’s living room, a media report said. 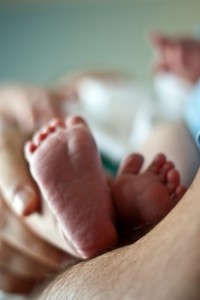 Patel claimed she was refused a second labour check by a triage nurse when she called her.

She claimed a triage nurse told her she was not in “active” labour and advised her to go home until the contractions became more frequent, the report said.

But an hour after the couple left, Patel found herself in constant pain and called the maternity triage nurse at 5.50 p.m. – and she was told again to wait at home.

Concerned their baby was just minutes away from being born, the couple drove back to the hospital.
“My labour pains were getting a lot stronger and I just knew the baby was going to come soon,” Patel was quoted as saying.
“By the time I had explained this over the phone, got cut off and got back through again, we were outside the hospital doors,” Patel said.

“They spoke to me like I was a child, like I didn’t know my own body. I’d given birth before and I knew what was happening, but they wouldn’t listen. We were left with no alternative but to go home,” she added.

But as soon as Lockhat dropped her off at her mother’s house, Patel started to give birth, the report said.

Her mother, Hanifa, delivered the baby herself on the living room floor aided by a 999 call-handler.

“All I could do was push. I kept thinking if they had checked me, I wouldn’t be giving birth in this situation,” she explained.

“I stayed in the toilet because I didn’t want my three-year-old daughter, Jasmine, to see what was happening.”

“Giving birth is meant to be a special experience, but this was just traumatic.”

When her mother, Hanifa, heard her daughter scream in the toilet and saw the baby’s head, she dialled 999.
Patel’s mother, 54, said: “It all happened so quickly. It was very scary. I grabbed some towels and managed to lie her down in the living room. It was very difficult because I had to hold the phone and catch the baby as she was born.”

Paramedics arrived 25 minutes after the baby was born and took the mother and daughter to hospital.