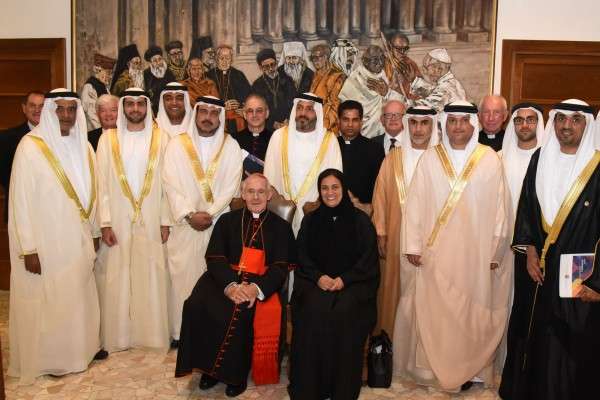 The decision by His Highness Sheikh Mohamed bin Zayed Al Nahyan, Crown Prince of Abu Dhabi and Deputy Supreme Commander of the UAE Armed Forces, to rename the mosque in Abu Dhabi carrying his name as the ‘Mary, Mother of Jesus Mosque’ is “testimony to what unites us, Christians and Muslims,” the Minister of State for Tolerance, SheikhaLubna Al Qasimi, has said.

In an opinion piece published on the news website International Catholic News (www.indcatholicnews.com), the Minister added, “It offers a message that we hope the followers of both faiths will take to heart, recognising that we share much in the way of common values and a common commitment to humanity.”

The website, with over four million hits a month and around 140,000 unique visitors, is one of Britain’s leading British Catholic websites, covering news of interest to Catholics around the world.

“As the UAE’s Minister of State for Tolerance, I am pleased to re-confirm our Government’s commitment to tolerance and dialogue, in pursuit of the greater goal of human co-existence,” she said.

The full text of her article follows.

The Mary, Mother of Jesus Mosque By SheikhaLubna Al Qasimi, UAE Minister of State for Tolerance “On June 14th, coinciding with the 19th day of the Muslim Holy Month of Ramadan, it was announced that one of the best-known mosques in Abu Dhabi, capital city of the United Arab Emirates, had been given a new name. Formerly known as the Sheikh Mohamed bin Zayed Mosque, after Abu Dhabi’s Crown Prince, it was henceforth to be known as the ‘Maryam Umm Issa’ Mosque, Arabic for ‘Mary, Mother of Jesus.’ The decision is one that testifies, in an easily understandable way, to the UAE’s firm commitment to the principles of religious tolerance and inter-faith dialogue.

Indeed, the location of the mosque provides further evidence of that commitment. It is immediately adjacent to the St. Joseph’s Catholic Cathedral, the Anglican St. Andrew’s Church and the Coptic Orthodox Cathedral, where, on Fridays, the UAE’s day of rest, thousands of people, Emirati citizens and expatriates, intermingle in harmony as they go to perform their prayers.

Such tolerance has been a fundamental element of the underlying philosophy of the UAE ever since its establishment in 1971. Though we are a Muslim-majority country, we now have over 40 churches, catering to hundreds of thousands of believers of many different Christian denominations, along with Sikh and Hindu places of worship. We take pride in that diversity, which encompasses the 200 or so nationalities that live in our country, and also in the evidence of our own ancient Christian heritage 1,400 years ago.

Our Government’s recognition of the importance of that diversity was marked in February last year by the creation of a Ministry of State for Tolerance, the only such ministry anywhere in the world. It is a portfolio with which I am honoured to have been entrusted.

The renaming of the new Mary, Mother of Jesus Mosque is an example of the spirit of tolerance and co-existence in the UAE. As noted by Sheikh Mohamed himself, the decision on renaming is intended to “consolidate the bonds of humanity between followers of different religions”.

The choice of name is, in itself, of huge significance. The Virgin Mary and Jesus, Maryam and Issa, are, of course, at the very heart of Christianity. They are too, however, very much at the heart of Islam. This choice of name is intended, in part, not only to inform the UAE’s Christian community of that but also to remind our Muslim community as well. At a time when there are those who seek to pit believers of one faith against the other, it is testimony to what unites us. It offers a message that we hope the followers of both faiths will take to heart, recognising that we share much in the way of common values and a common commitment to humanity.

Ramadan is a month when Muslims fast from dawn to dusk to commemorate the first revelation of the Quran, our Holy book, to the Prophet Mohammed [PBUH]. It is a time to re-dedicate ourselves, and to reach out to others in a spirit of giving and a commitment to humanity. This year, as in previous years, we in the UAE have seen too how our Christian communities have responded to that, with churches inviting nearby Muslim residents to come to them at dusk for the Iftar, the formal ending of the daily fast.

I have noted, with pride, the way in which Christian leaders in the Emirates have welcomed the decision to rename the mosque. I am, as well, gratified to have seen the response from elsewhere. As one leading Catholic layman in Britain, Lord Alton of Liverpool, has commented, the decision “is powerful evidence of the commitment of the United Arab Emirates to the principles of religious tolerance.”

“At a time when enormous intolerance to Christianity and Christians is to be found across much of the Middle East, this decision by H.H. Sheikh Mohamed is particularly welcome,” he said.

As the UAE’s Minister of State for Tolerance, I am pleased to re-confirm our Government’s commitment to tolerance and dialogue, in pursuit of the greater goal of human co-existence. In the renaming of the Mary, Mother of Jesus Mosque, as in all aspects of our daily life, that is something which we will continue to pursue.