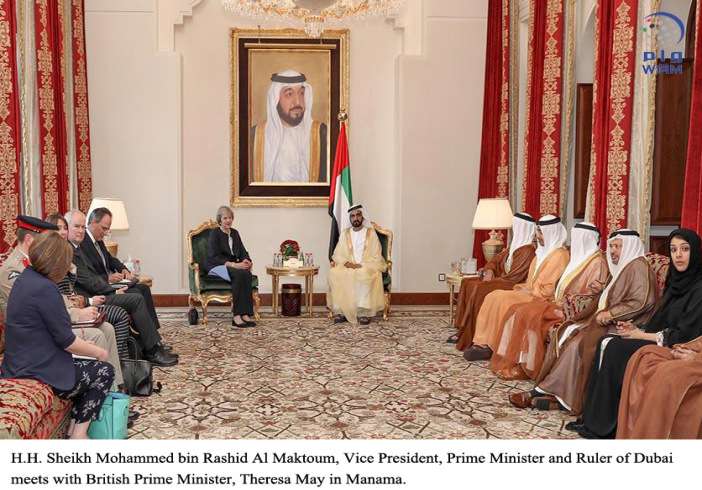 UAE Vice President and Prime Minister and Ruler of Dubai, Sheikh Mohammed bin Rashid Al Maktoum, has received British Prime Minister Theresa May, in Manama, Bahrain. Theresa May arrives in Bahrain as part of the 37th GCC summit being held in Manama.

The two sides discussed several issues related to the historic friendship between the two countries and ways to enhance them, especially in renewable energy, tourism and banking. They further reviewed a number of regional and international issues related to terrorism and ways to fight it to eliminate its resources at various levels, and also discussed promoting security, stability and peace in the region and the world.

UAU Vice President hailed the historic ties between the two friendly people where as he also stressed the importance of boosting the relations as both countries are keen to pursue mutual interests and objectives.

UAE is the fourth strategic trade partner of the UK and about 1.5 million British tourists visit the country.

May confirmed the UK’s participation in Expo 2020 Dubai, hosted by the UAE ,pointing out her government’s support for the international event, as well as the participation of the British public and private sectors in the event.