The UK has asked Russia for information that might help clear up how a British couple came into contact with the same type of nerve agent that came close to killing a former Russian spy and his daughter months before, a government official said … reports Asian Lite News 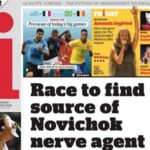 UK Security Minister Ben Wallace said while there was no information forthcoming from Russia, it would be impossible to give 100 per cent guarantees to British citizens that they would not come into contact with contamination from the Russian-made Novichok nerve agent, Efe news reported.

The couple — Charlie Rowley, 45, and Dawn Sturgess, 44 — fell ill at a house in Amesbury, Wiltshire, on Saturday and remain in a critical condition, the BBC said.

“The nature of an agent such as Novichok is that it is an absolutely tiny needle in a very large haystack,” said Wallace, describing how difficult it was to trace evidence.

“The offer is still there to the Russian state to try and assist us, to tell us what happened, because that would definitely help to keep the people of Salisbury safe,” he added.

John Glen, the lawmaker representing Salisbury in the UK Parliament, said he was extremely concerned about the latest poisoning which had left two people fighting for their lives in the hospital since it had echoes of the attempted assassination of Sergei Skripal in March.

“My strong instinct is that they have somehow encountered some discarded paraphernalia from the Skripal incident and certainly there is no reason to believe they would have been targeted in any separate way, but nonetheless the uncertainty of how that happened is concerning,” Glen said.

Meanwhile, Neil Basu, Assistant Commissioner Specialist Operations of London’s Metropolitan Police said they had received test results from the UK’s foremost hazardous chemical laboratory in Porton Down that showed the two people had been exposed to Novichok, the nerve agent used in the Skripal case.

“We can confirm that the man and woman have been exposed to the nerve agent Novichok, which has been identified as the same nerve agent that contaminated both Yulia and Sergei Skripal,” Basu said.

Basu said some 100 detectives from the Counter Terrorism Policing Network were helping Wiltshire Police in their investigations.