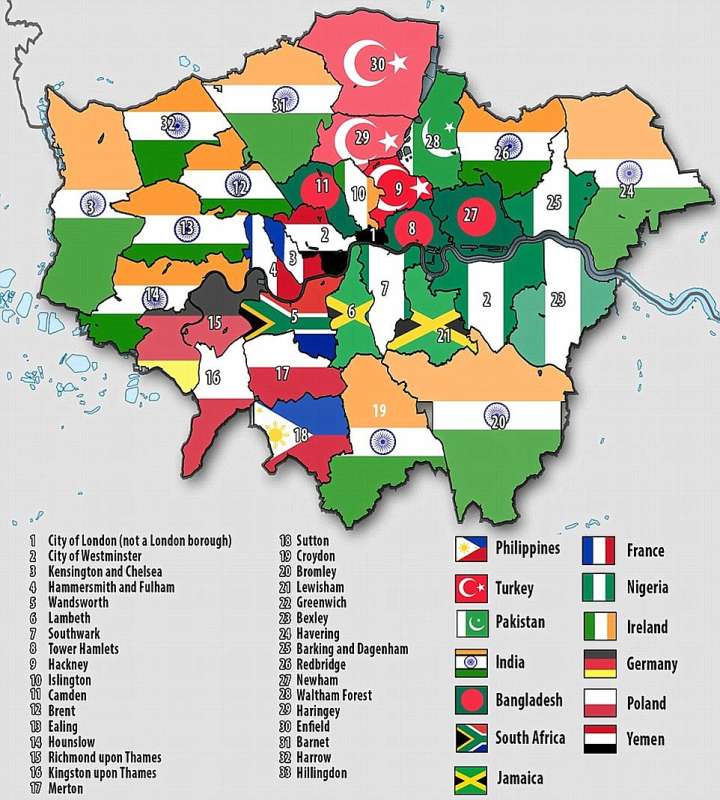 The capital city of Britain has reached the highest population in its history – 8.6million – and it is also at its most diverse. One in three residents originally born abroad and in some areas half have a different country of birth to Britain. People originally from India make up the highest numbers, followed by those from Nigeria, Poland and Bangladesh.

Indian-origin Londoners dominate 10 of the capital’s 32 boroughs while Londoners born in Nigeria, Poland, Turkey and Bangladesh have the highest numbers in at least three areas each. In some areas including Westminster, Kensington and Chelsea and Brent more than half the population born abroad, according to figures from the Mayor of London’s Data Store.

This year London’s population reached an all time high of 8.6million with two million more people moving to the city in the past two decades, many of them from abroad. Capital’s immigrant population will hit five million in 2031, when it will overtake British-born residents for first time.

The 8.6million population of London is its peak since the previous record, in 1939, before the devastation of the Second World War but more than 2.2million Londoners left for a new life in the surrounding counties or the suburbs over the next 50 years.

Statistics show London’s inner boroughs have a far higher immigrant population than its outer boroughs and there is also a clear trend of people of certain nationalities moving to boroughs already heavily-populated by their fellow countrymen.

Brent and Haringey have the highest proportion of foreign-born residents at 53.3 per cent, followed by Kensington and Chelsea and Westminster, on 51.8 per cent and 50.9 per cent respectively, according to the Mayor of London’s Data Store.