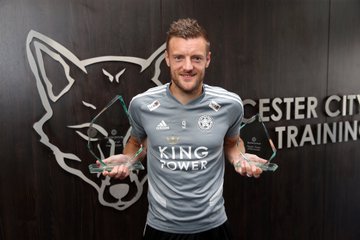 His achievement is special as it also takes him into record books. The 33-year-old is the first Leicester City player to claim the award and is only the second Englishman after Harry Kane to take the crown in the last 20 years.

He was, however, unable to score in Leicester’s 0-2 final day loss to Manchester United on Sunday – a result which meant the Foxes missed out on a Champions League place. Leicester finished fifth after their defeat and will compete in the 2020/21 UEFA Europa League.

The 33-year-old is the first Leicester City player to claim the award and is only the second Englishman after Harry Kane to take the crown in the last 20 years.

“Jamie’s been outstanding for us – our Player of the Season,” Leicester manager Brendan Rodgers told the club’s official website. “He knows he can’t do it without his team-mates, but he also knows, and the team know, that they couldn’t have done it without him and challenge.”

Manchester City’s Brazilian keeper Ederson won the Golden Glove award after keeping his 16th clean sheet of the season against Norwich City to beat Burnley’s Nick Pope to the award.

The Brazilian claimed the award after being the runner-up in each of his first two Premier League campaigns, firstly finishing behind David De Gea in 2017/18, then compatriot Alisson last season.