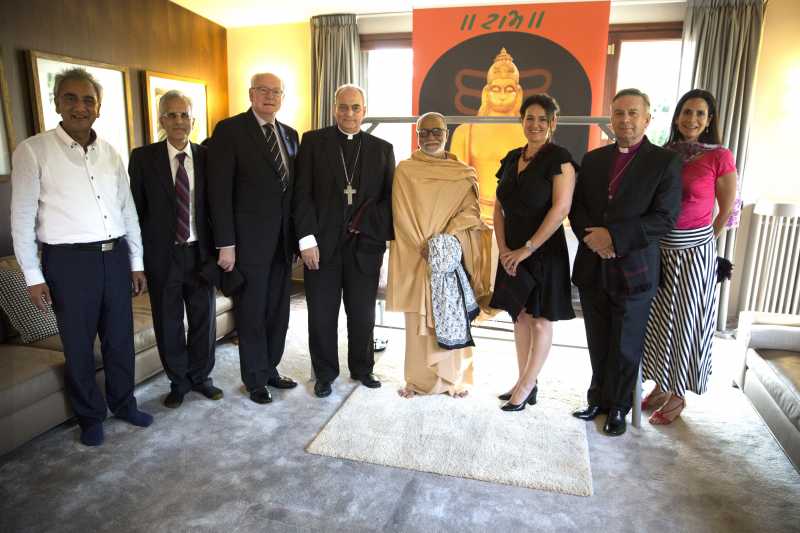 The Vatican’s head of Interreligious dialogue paid tribute to renowned Hindu spiritual leader Morari Bapu at an event in Rome. Cardinal Tauran, the President of the Pontifical Council for Interreligious Dialogue, attended a Hindu recital that is running for 9 days in the heart of Rome.

Addressing the audience of nearly 1,000, the Cardinal said: “I must humbly acknowledge that this is the first time ever that I am present in a spiritual discourse organised by followers of other religious traditions.”

He spoke of the importance of cultivating a “mutual understanding of each other’s spiritual heritages, appreciation of what we have in common and respect in matters on which we disagree.”

Introducing the Cardinal before he spoke, Member of the House of Lords and organiser of the recital Lord Popat said: “This Katha is intended to highlight how much Christianity and Hinduism have in common; to give us all a chance to reflect on how we can learn more from people of other faiths, and to highlight the tremendous history and work of the Catholic Church.”

Morari Bapu was also invited and warmly welcomed by Cardinal Tauran earlier in the week at the PCID headquarters in the Vatican. Following the meeting with other senior priests and scholars at the PCID, Bapu was invited to visit the renowned St Peter’s Basilica, the largest church in the world.

Bapu has paid tribute to the life of Jesus Christ during his Katha touching on his principles which mirror those of the Hindu faith. Bapu paid homage to Jesus Christ, “for sacrificing themselves for propagating the domain of truth (Satya), of love (Prem) and of Compassion (Karuna).”

It is the first time that a Hindu recital of this nature has taken place in Italy. Morari Bapu has held over seven hundred of these events in India and around the world, including Jerusalem, Bhutan and the mountains of Tibet.

Bapu said he felt the need to hold his next Katha in Rome on account of the spiritual vibrations and the sacred memories of Christian faith. The Katha’s message of embodying Truth, Love and Compassions blends well with Christian values and verities.

“The Vatican city is the land of sacrifices and suffering by the Saints and Prophets. This provides the best possible environment for Universal Peace and amity among nations. This Ram Katha is being organized because of my sheer love and admiration for the teachings of Christianity.

“The Ramayan is as relevant today as it was when it was written four centuries ago. In fact, in the modern world divided by hatreds, blasphemies and callousness, the values or Ram Katha – Truth, Love, Compassion are needed more for the world in which we live.”

Bapu has millions of admirers across the globe including Conservative peer Lord Popat of Harrow who has been devoted follower for over 30 years. His work for the British Government has led to several meetings between Bapu and the Prime Minister David Cameron.