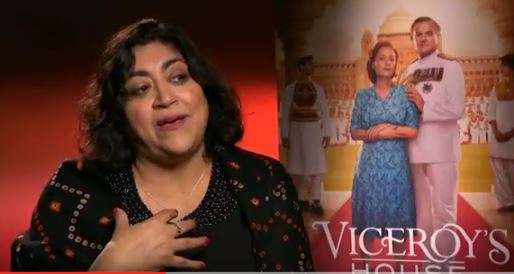 Gurinder Chadha, the BAFTA nominated director, released a video message to mark International  Women’s Day. She shares her experience in the male dominated film industry and become the only female director of British-Asian origin in the video. Happy Women’s Day from all at Asian Lite News

Chadha, the creator of world classics Bhaji on Beach Bend it Like Beckham, said the movie Viceroy’s House was so personal in many counts. “Like me, thousands are there who grew up without a homeland. I always yearned for a homeland and my movie depict that pain.”

“My family was on the wrong side during partition,” Chadha said. “Along with their friends and neighbours, they suffered during that terrible time and not many people are aware about that. My picture is a British-Asian’s interpretation of that episode.”

FROM WIKIPEDIA: Gurinder’s films explore the lives of Indians living in England. This common theme among her work showcases the trials of Indian women living in England and how they must reconcile their converging traditional and modern cultures. Although many of her films seem like simple quirky comedies about Indian women, they actually address many social and emotional issues, especially ones faced by immigrants caught between two worlds.
Much of her work also consists of adaptations from book to film, but with a different flare. She is best known for the hit films Bhaji on the Beach (1993), Bend It Like Beckham (2002), Bride and Prejudice (2004), Angus, Thongs and Perfect Snogging (2008), and the comedy film It’s a Wonderful Afterlife (2010). Her latest feature is the partition drama Viceroy’s House (2017).