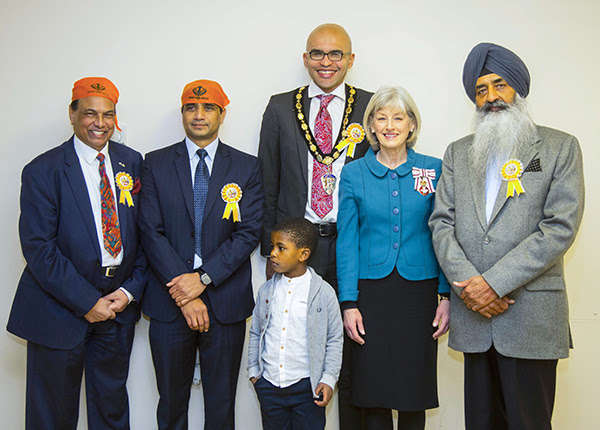 Hundreds of Sikhs Celebrate 350th Anniversary of Guru Gobind Singh in Cardiff. Several dignitaries from Wales were present in the event at the Sikh Gurdwara on Pearl Street, including the head of the Sikh Council of Wales Gurmit Singh Randhawa MBE, the Indian Honorary Consul General Raj Aggarwal OBE DL and Mr D.P. Singh from the Indian High Commission…reports Asian Lite News

A major Sikh event was organised in Cardiff on Saturday to celebrate the 350th anniversary of the birth of Sikh Guru Gobind Singh.

Several dignitaries from Wales were in attendance of the 350th Pratash Utsav event at the Sikh Gurdwara on Pearl Street, Cardiff, including the head of the Sikh Council of Wales Gurmit Singh Randhawa MBE, the Indian Honorary Consul General Raj Aggarwal OBE DL and Mr D.P. Singh from the Indian High Commission.

The Professor of Indian religions at Cardiff University, James Hegarty spoke on principles of Guru Govind ji , humanity and freedom.

Over 500 people attended the free event which was open to the public and there was a speech by Raj Aggarwal OBE and the Anand Sahib prayer read by Bhai Satbir Singh ji followed by a Jatha (parade).

“The message on the day was simple, it was one of communities coming together and celebrating the birth anniversary of Guru Gobind Singh Ji, the common and most respected Guru who stood for the poor and down trodden people in up holding the principles of justice, equality and freedom for all,” said Gurmit Singh Randhawa, Chairman of the Sikh Council of Wales.

“It was a beautiful ceremony and celebration of the Sikh tradition. The Sikh community in Wales are hard-working and prosperous and are an amazing asset to the country. This was a huge anniversary for all Sikhs in Wales and it was especially fantastic that it is open up to people of all religious faiths to come and share such a joyous occasion and for all communities in Wales to come together to enjoy our wonderfully diverse and inclusive society,” said the Indian diplomat Raj Aggarwal.

“There have been huge celebrations organised all over the world for the 350th Pratash Utsav and all of India and the world  will share with the joyous celebrations of this amazing landmark,” he added.