History repeats. May goes Cameron way to be humiliated by the electorate. The new age leaders are slow listeners. In May’s case, it’s over dependence on un-elected coterie besides a dose of over-ambition set the cast….writes Kaliph Anaz 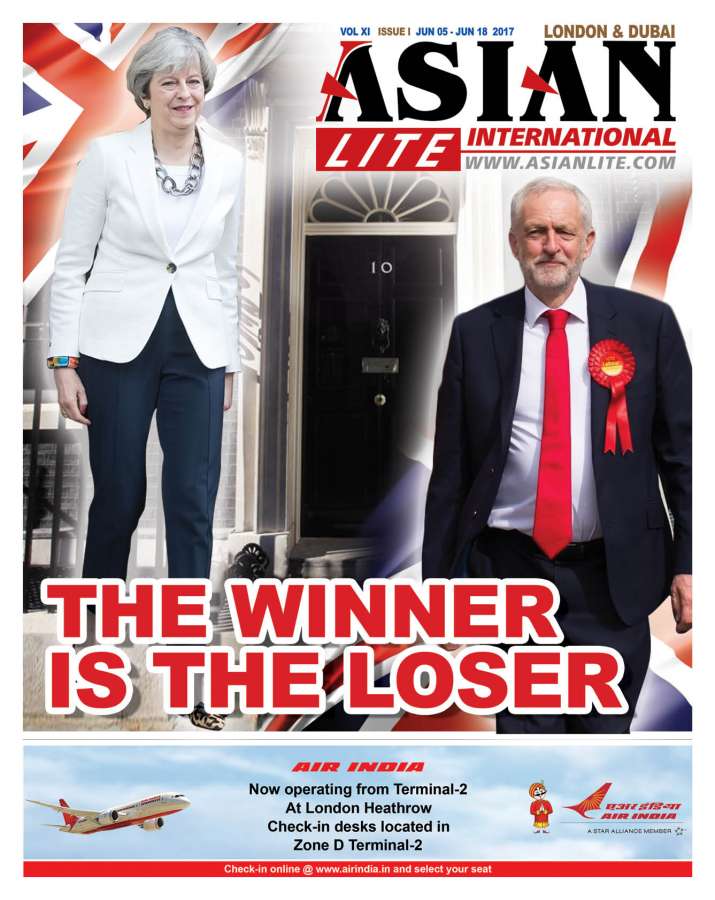 Politics has become Politricks. Strange the game politicians play. Prime Minister Theresa May called the election increase her narrow majority to provide a stable government. The outcome was a hung parliament and a government depending on the mercy of 10 MPs from Northern Ireland. While the winner, who got the support of a spectrum of electorate is planning his next agenda of protest. Most probably we will go to poll again within a year.

History repeats. May goes Cameron way to be humiliated by the electorate. The new age leaders are slow listeners. In May’s case, it’s over dependence on un-elected coterie besides a dose of over-ambition set the cast. A dose of trade-mark Mayian arrogance fuelled her fall. The lady who coined ‘Nasty Party Tory’ tried to bury the legacy of her predecessor by unveiling her own agenda on care reforms, education, NHS, infra-structure projects. Cameron was humiliated when May turned her back on his education policy by unveiling the grammar school policy.

May had lost the Commons majority that Cameron had earned through his five years of Compassionate Conservatism policies. But he gambled that with EU referendum after narrowly winning the Scottish one. 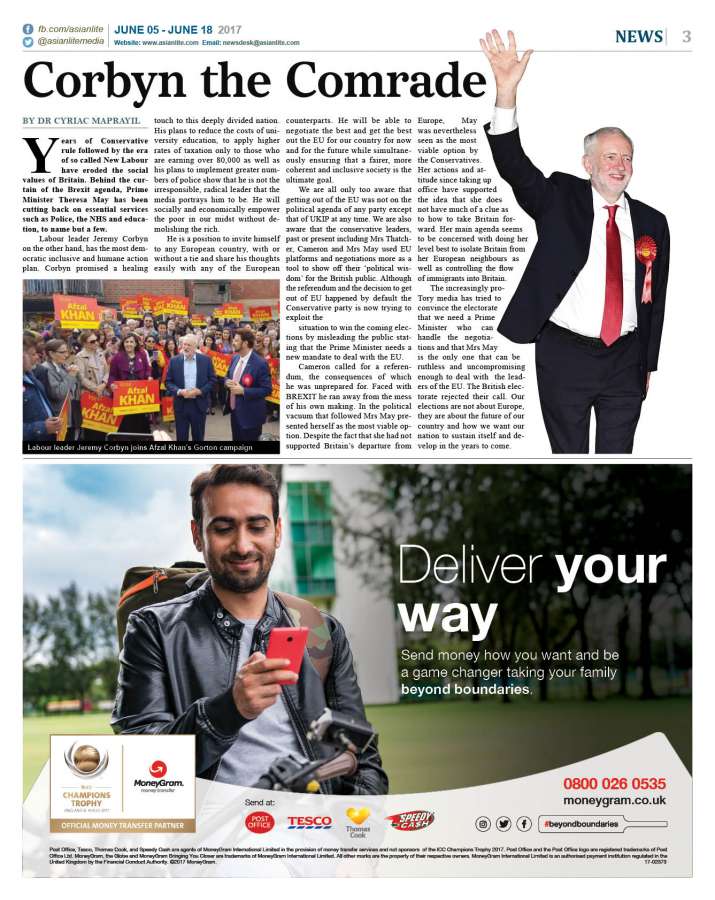 Within hours after assuming office, May targeted her rivals. Poor George! Instead of counting numbers, the former No 2 at No 11 Downing Street is cobbling letters. Former chancellor George Osborne, now the editor of London Evening Standard,   was sacked brutally without giving him any credit for shoring up the economy at a very difficult phase of British history. Politics has become a thankless profession. Especially for chancellors. You will be remembered till your last budget.

Blame the austerity is an easy way to escape from the responsibilities. The London attack exposed the Lady’s tough stand on cutting the number of Bobbies on Beat. Mrs May was part of that same austerity drive which slashed the policemen on beat and put the NHS on care. The holier than though attitude is not suitable for a vicar’s girl. “Nothing has changed! Nothing has changed!” May screamed during a campaign rally when asked about the care reforms. But many things have changed by that time. She failed to see the changed landscape where the activist turned politician garnering support from a major segment in the society – the students.

The failure to read the sign on the wall put May in trouble. The over confidence, fuelled by the 20 point lead over a besieged leader, prompt May to unveil her plan to reform winter fuel allowance; free meal for primary school children and care of senior citizens. Through the dementia tax and the failure to guarantee the triple lock on pensions annoyed Tory vote bank of elderly voters. 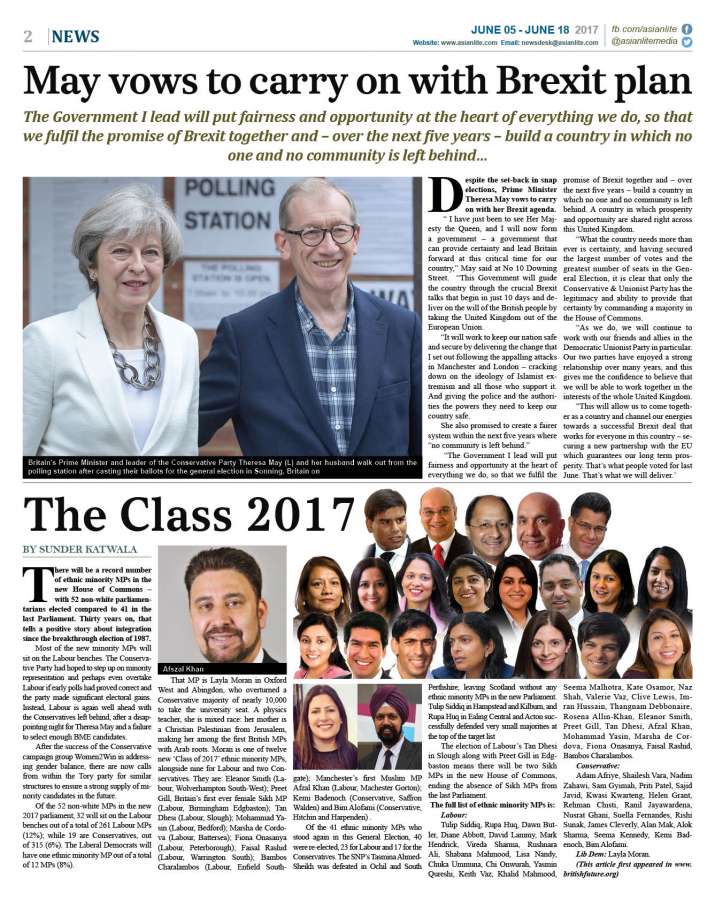 Who got the mandate now? The prime minister called this election because she wanted a mandate. But the electorate refuse to give her the desired mandate.

“The mandate she’s got is lost Conservative seats, lost votes, lost support and lost confidence,” said Mr Corbyn after the verdict.  “I would have thought that’s enough to go, actually, and make way for a government that will be truly representative of all of the people of this country.”

The call was echoed by deputy.   “May said it’s a fact that if we lose just six seats we will lose our majority and Jeremy Corbyn will be prime minister,” said Labour’s Deputy Leader Tom Watson.

“The prime minister fought one of the most negative, pessimistic and defensive campaigns in British history and the British people delivered their verdict on that,” he added. “She said she was strong and stable the public saw she was weak and wobbly. She said she was a bloody difficult woman, she boasted about it, the public saw she was just a woman who was finding it all a bit too bloody difficult.”

“People responded well to Jeremy Corbyn’s honest, integrity, candor and energy. Just as they saw Theresa May run away from holding herself to account. They saw through the lies of the Murdoch machine who tried to frighten people into voting Tory.”

The Liberal Democrats said Mrs May had “put the future of the country at risk with arrogance and vanity.” Lib Dem leader Tim Farron said May should resign “if she has an ounce of self-respect”.

This is 21st century Mr Farron. There is no room for self-respect or respect for others. Especially in politics. But one thing is clear. The hung parliament undermines May’s authority over the party and the government. That means another election rising in the horizon. Let’s wait and see.