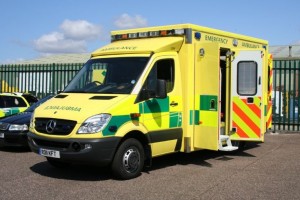 A heavily-pregnant woman gave birth to a baby girl in a court in Britain after going into labour in the witness room, a media report said.

The woman, 25, who had travelled to the Birmingham Crown Court to support a witness giving evidence in a trial, went into labour in the witness room as paramedics and court staff carried out the delivery Tuesday, the Birmingham Mail reported Wednesday.

The new-born and the mother were taken by ambulance to Birmingham Women’s Hospital.

“Ambulance crews were called to Birmingham Crown Court at 2.40 p.m. to reports that a 25-year-old pregnant woman had gone into labour,” a spokesman for West Midlands Ambulance Service said in its Twitter update.

A member of the court staff said everyone was overjoyed at the happy delivery.

“I think she was due yesterday so she was taking a risk coming to court,” a staff member said.

Earlier this month, a young mother gave birth to a baby daughter in front of stunned shoppers after going into labour in Birmingham city centre.

The woman was walking down the busy New Street when the delivery drama began.

Security and store staff held up sheets to give her privacy from the growing crowds when she went into labour, the report said.