‘Yugpurush – Mahatma’s Mahatma’, a play about the untold story of Mahatma Gandhi and his spiritual guide Shrimad Rajchandra, warmed the hearts of an enthusiastic Manchester audience at the Wythenshawe Forum on Saturday 3rd February, following its UK tour in London, Oxford and Birmingham. The performance was attended by dignitaries including the Mayors of Manchester, Trafford and Stockport and the Chief Inspector of the Greater Manchester Police. Attendees from multiple faiths came to watch the play including the Very Reverend Roger Govender, Dean of Manchester Cathedral, Mr Davis Davis, past president of the Jewish synagogue and adviser to the British transport police, May Yau, president of Manchester Buddhist Light International Association and Ramana Devi of the Shiva Trust Charity.

With over a thousand performances to date, the play has captivated audiences in over 300 cities around the world in just one year. Mahatma Gandhi is known as an inspirational leader and an icon of peace and non-violence but to reveal that he too was inspired and guided by a great spiritual master is one of the many facets of this fascinating account of an untold story in Indian history.

Councillor Linda Holt, the Mayor of Stockport found the play ‘very enlightening’ and stated that “Gandhi has always been a very inspirational character to me and to see the play tonight promoting the peace and non-violence in this day and age is so necessary. We see examples of people like Gandhi now, such as in the Manchester bombings where the victims and relatives are not showing malice towards the people that did it, but are working together. Gandhi’s message and what we saw tonight is still coming through now to people. I hope plays like this will promote non-violence and peace, that’s what we need.”

Chief Inspector Umer Khan works for the Greater Manchester Police Neighbourhood Confidence Qualities team found the play ‘inspiring’ and commented that “I work in a field which is about violence and people who have experienced breakdown in relationships so this play really inspires individuals to build strong friendships and relationships. Non-violence, compassion, forgiveness and love are values we can all learn and bring into our lives and have a great society.”

The net proceeds of the play will fund a 250-bed multi-speciality charity hospital in one of the poorest rural regions of Gujarat, India echoing the message of peace and compassion that the play holds at its heart.

The play concluded its UK tour on 4th February in Leicester. For more information about Shrimad Rajchandra Mission Dharampur, producers of the play and its worldwide tour visit www.yugpurush.org 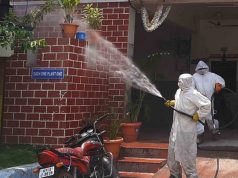