Imagine “shutting down” a nuclear power plant by pressing a button with your thumb, or having access to no-go zones for the public in a nuclear site — all accompanied by experts lucidly explaining the core operations….writes  Sirshendu Panth

These and various other thrills awaited a small group of mediapersons from various geographies on a visit to Russia’s Novovoronezh nuclear plant — the commissioning of whose first unit nearly 53 years ago is taken as a virtual starting point in the history of nuclear power development not only in the erstwhile USSR but also in a number of eastern and central European countries.

The plant stands close to the town of Novovoronezh, located on the left bank of the Don river — about 55 km south of Voronezh, the main city and administrative unit of Voronezh Oblast (as provinces are called in Russian).

It took 70 minutes of flying time to cover the over 500 km distance from Moscow to Voronezh airport, where the journalists were divided into small groups — each provided with a separate bus and escorted by security service officers during the entire tour.

The security and industrial safety briefing during the transfer laid down the rigorous dos and don’ts, and protective gear was also handed out.

One of the instructions read: “Walk along sidewalks, and look out for audible signals. For instance, one long signal followed by three short signals will be blown by the machinist of a locomotive in case people appear on its travel line.”

The journey from the airport to Voronezh — the centre of Russia’s black soil region — was pleasant, with the road lined with pine and birch trees and dachas or private houses seen in ones and twos at a distance. 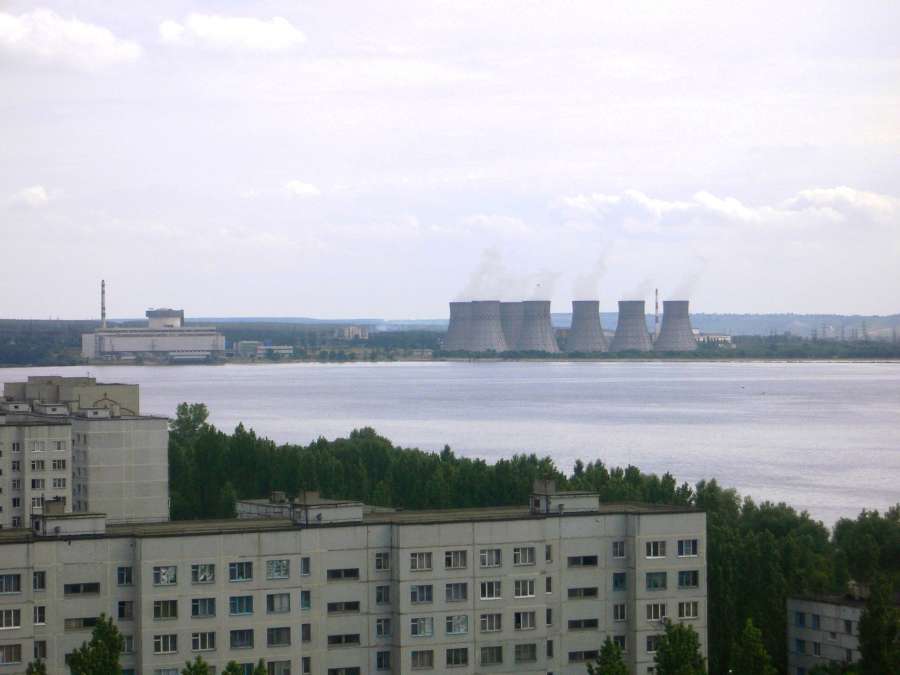 The first stop was the plant’s new information centre in Voronezh town, a city of a million people. The aroma of fresh paint pervaded the nicely done up information centre, close to which were the two training centre buildings.

Comprising 50 rooms, the training centre caters not only to personnel from the Russian Federation but also those from other countries which are constructing nuclear plants.

“Here we impart training to maintenance and operating personnel. We offer simulations of all actions that may happen at a unit. The trainees are made familiar with both normal operations and the emergency situations, including manual shutdown of the plant under extreme conditions,” said Vladimir Lobanov, deputy chief engineer for personnel training.

After a walk through the classrooms, the visitors were brought before a full scope simulator (physical copy) of the main control room of the plant’s very latest unit 6 — that began operations this year.

“Look, here even the lead engineer’s workstation is in the same position as it is in the actual unit,” announced Lobanov.

At this point, Lobanov made a thrilling offer. “Why don’t you shut down the plant yourself,” he asked, pointing to a small button.

An emergency situation was simulated, and at the press of the button, things began to happen (or not happen) within four seconds, and the “unit” came to a halt.

After the simulation, it was time for the real thing. The visitors were transferred to the plant’s unit five, that was commissioned in 1980, and would be operational till 2040 after being equipped with additional “post-Fukushima” (the Japanese nuclear plant that met with a disaster in 2011 primarily triggered by a tsunami after an earthquake) emergency facilities.

After passing through a high security checkpoint, the delegation was taken on a guided tour through the emergency mobile equipment site, and shown the mobile pumping unit. Then came the safety systems building, which, according to plant shift supervisor Alexander Kulakov, has been designed to withstand the severest of earthquakes and other disasters.

“There is now no chance of any Fukushima-type tragedy,” said Kulakov, a physicist with a charming and super cool demeanour and 17 years of experience. He has been holding his present post for the last four years.

The premises had a lot of empty spaces, with the white and blue reactor (VVER 1000) building looking awesome.

“The reactor building is the main structure of the plant, with all other edifices and structures arranged around it. The normal operation area includes control boards of reactor and turbine department operations as well as the unit shift supervisor’s workstation,” said the aquiline nosed shift supervisor.

Climbing up the stairs, Kulakov led the scribes to the turbine hall, where the machines were then undergoing routine maintenance.

The tour ended with a guide through the main control room (MCR).

A common-use screen is provided at the MCR for fast and clear assessment of the prevailing situation, allowing the shift crew to use the same information on the unit conditions.

“In the rare case of MCR inhabitability, the unit is controlled from the emergency control room,” said Kulakov.