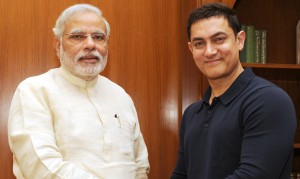 Aamir tweeted: “Just came out of my meeting with Honorable Prime Minister of India Shree Narendra Modiji. Was very kind of him to spare his valuable time.

“Shared with him the overwhelming support that we got from people across the country through Vote for Change Campaign… on SMJ (‘Satyamev Jayate’) on the various issues that we tackled in our show. He has assured me that he will look into all the matters.”

The meeting was held at the South Block here, the Prime Minister’s Office said.

Aamir too posted a photograph of himself immersed in conversation with Modi sitting across the table.

The first season of Aamir’s “Satyamev Jayate” went on air on Star Plus May 2012 while the second season was aired in March 2014 and ended in April. Now the actor is working on the third season of the show, where he brings to the fore startling facts and figures about issues concerning the Indian society.

Be it dowry, rape, bribery, corruption or criminalisation of politics – Aamir has so far dealt with a wide range of social issues.