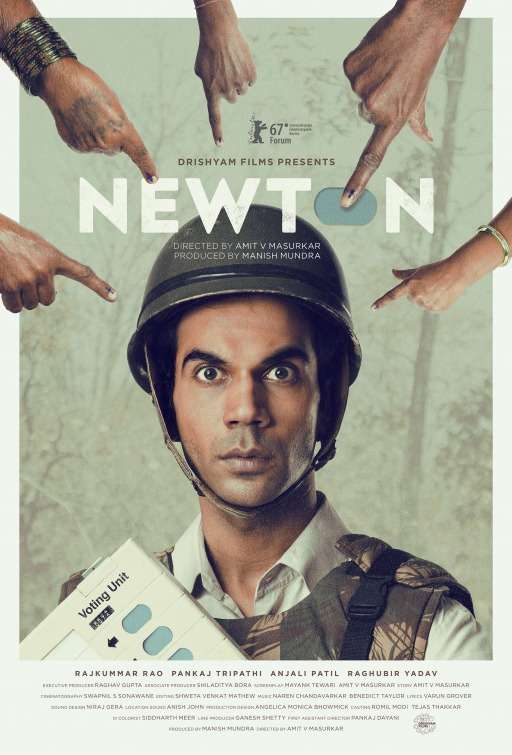 “Newton”, a Hindi film set against the backdrop of elections in the world’s largest democracy, was on Friday announced as India’s official entry for the Best Foreign Language Film at the Oscars 2018. The film’s team says it’s an encouragement for filmmakers who are willing to take risks…..reports Asian Lite News

“Newton”, directed by Amit V. Masurkar and starring the stellar Rajkummar Rao, was chosen from among 26 titles from different languages by a 14-member jury appointed by the Film Federation of India (FFI).

“It was a unanimous decision. Titles like ‘Dangal’ and ‘Mukti Bhavan’ were part of the list,” Supran Sen, secretary general of FFI, said.

“Newton”, which released on Friday, revolves around a young government clerk who is sent on election duty to a Maoist-controlled town and how the ideological struggle puts him in an awkward situation. It was shot in the interiors of Chhattisgarh.

Masurkar feels honoured that a story rooted in the country’s political system was chosen.

So far, “Mother India”, “Salaam Bombay!” and “Lagaan: Once Upon a Time in India” are the only Indian films that made it to the top five in the Best Foreign Language Film category at the Academy Awards, but none have won the honour.

How is team “Newton” planning its Oscar journey considering Indian films never make it beyond the entry gate?

“For now, the fact that ‘Newton’ has been selected as India’s official entry is in itself a big deal for me. I’m still trying to process that information. It’s still to sink in. Whether we make it to the shortlist or win or not are thoughts that are far away from my head right now,” Masurkar said.

He hopes the movie “will bring attention to the need to strengthen democracy in our country”.

The excitement and contentment in National Award winning actor Rajkummar’s voice was palpable as he shared his excitement.

“It feels amazing and brilliant that a film like ‘Newton’, which is unique and special for all of us, and which we have made with so much honesty and purity, without keeping any of those commercial thing in mind about what works and what sells, gets this. We just had to tell a simple, honest story and I am glad that it’s resonating with everyone.

“The kind of response that we are getting from the critics, and now the fact that it makes it as India’s official entry to the Oscars, it’s huge.”

“It’s something to be proud of as we have a thousand number of films coming out each year and out of that number, our film gets an entry. The entry is making us feel proud, so the win (if it happens) will have an amazing impact on the entire film fraternity.

“‘Newton’ is a film which will reflect real India and it is not at all a biased project,” he said.

Filmmaker Hansal Mehta, who has worked closely with Rajkummar in films like “Shahid” and “Aligarh”, also hailed “Newton” as the best choice.

“‘Newton’ is India’s entry to the Oscars. The best choice in years by the federation,” Mehta tweeted, adding: “If films like ‘A Separation’ and ‘Children of Heaven’ made it to the Oscar nominations, so can ‘Newton’. It is our best shot. Manish Mundra go for it!”

The film is produced by Manish Mundra of Drishyam Films, the company best known for backing critically-acclaimed projects such as “Masaan” and “Umrika”.

Mundra said that “for the news to be announced on the day of the theatrical release of ‘Newton’ across India — the stars are truly aligning for us”.

The 90th Academy Awards are scheduled for March 4, 2018 in Los Angeles.