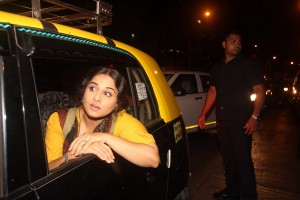 , who is currently busy promoting “Bobby Jasoos”, says she is excited to associate with Mahesh Bhatt in “Humari Adhuri Kahaani”.

To be directed by Mohit Suri, “Humari Adhuri Kahaani” will be co-produced by Bhatt under his banner Vishesh Films and Fox Star Studios.

Having made her cinematic debut in 2005 with “Parineeta”, an adaptation of a 1914 eponymous Bengali novel, Vidya has proved her versatility film after film. Her strong presence and performance in films like “No One Killed Jessica” and “Kahaani” have made her a sought after name in Bollywood.

Her next film, “Bobby Jasoos” revolves around a female character and she will be seen romancing young actor Ali Faizal. The film is directed by Samar Shaikh and co-produced by Dia Mirza and her beau Sahil Sangha.

Talking about her acting career so far, Vidya says that she “keeps on hunting for different roles” and that she never understood the difference between “conventional and unconventional films.”

” ‘Parineeta’ was an unconventional debut and it happened instinctively…I get bored easily and for me, an actor is someone who lives different people’s life with different roles. With each film I get to do different films,” she added.