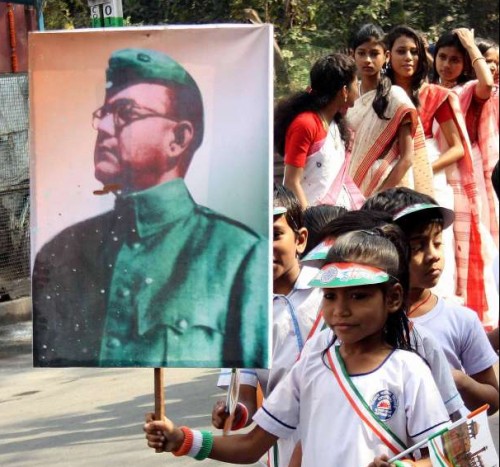 Angry and shocked over the alleged snooping on Netaji Subhas Chandra Bose’ family by successive Congress governments, concerned citizens here termed it a “national shame” and demanded to know the truth that is purportedly buried in secret government files.

United in rage, a large section of eminent personalities and commoners alike have called for the declassification of all secret government files on the nationalist leader.

With the fresh revelations pertaining to 20-year period between 1948 to 1968 making the headlines last week, the clamour for publicising over 150 secret documents gained ground, prompting the central government to set up an inter-ministerial committee headed by the Cabinet Secretary to review the Official Secrets Act in the context of such files.

Expressing his disbelief that the Jawaharlal Nehru government could order such snooping, former Lok Sabha speaker Somnath Chatterjee called for making the secret documents public for the truth to come out.

“Snooping has always been unacceptable although it is quite unbelievable that Nehru would have ordered such a thing. But then all these things would become clear if the classified documents of Bose are made public. So I hope all the declassification campaigns bear fruit,” Chatterjee said.

According to documents accessed by author and researcher Anuj Dhar, Bose’s two nephews Sisir Kumar Bose and Amiya Nath Bose were among the family members spied upon for 20 years. While Sisir is said to be the person who drove Netaji to Gomoh in Bihar to facilitate his “great escape”, Amiya Nath has often been called the “ideological disciple” of the great leader.

Jawaharlal Nehru was prime minister for 16 of these 20 years.

Chatterjee, however, expressed his reservations over the inter-ministerial panel that was constituted Wednesday.

“I don’t know if the panel would serve any purpose. Only time will tell, if it’s a concrete move or a mere eyewash,” added Chatterjee.

“It’s a national shame. All the secret Netaji documents must be declassified because the people of India have the right to know what happened to their hero,” added Ganguly.

“There are a number of conspiracy theories surrounding Bose and his eventual disappearance. So to put to rest all the speculations surrounding him, it is imperative all documents are made public,” Mukherjee said.

Expressing disgust and shock over the issue, a section of Bose family which has been running a declassification campaign has demanded a judicial probe into the snooping saga.

“We have long been claiming the Bose family is under surveillance and now this has been established. Only a judicial probe can reveal why and who ordered such an outrageous thing,” Amiya Nath’s son and Netaji’s grand nephew Chandra Kumar Bose said.

Chandra Kumar also hailed the Modi government’s decision for setting up the panel “just two days after he assured my brother Surya Bose. He made sure his words were transformed into action”.

Another Bose scion and Trinamool Congress parliamentarian, Sugata Bose, who had been opposing declassification thus far too now has called for their publication. Though he sounded sceptical about the utility of the panel set up the BJP led central government.

“I think if more such documents are there. They must be brought into the public domain,” said the Harvard University professor.

Differing with majority members of the Bose family, Sugata has been asserting that Netaji was killed in a plane crash in Taiwan on August 18, 1945.

On earlier occasions he had called the declassification campaign as a “non-issue” claiming such secret files did not exist.

People from various strata of the society including students and teachers, young and old, have all voiced their right to know the truth behind the mysterious disappearance of the national hero, who left the comforts of home to venture into the uncertainty of war-ravaged Europe and Asia and raised an army, fired by an indomitable spirit to drive the British out of India.

“All documents should be made public. We have a right to know what happened to him? Was he alive when India gained independence? Did somebody harm him later on?” said Saikat Bagchi, sipping tea from an earthen cup at a South Kolkata stall.

For Sudokkshina Mukherjee, a middle aged teacher, it is high time the authorities apologise to the nation for the way Netaji’s descendants were treated in free India.

“Why are they so afraid of netaji? Is it because he is the tallest national leader? We won’t sit idle now if we are not told conclusively what happned to him in the end,” she said.