Asma Said Khan is a food Santa Claus of sorts. Growing up in Calcutta, with her mother running a catering business, she was surrounded by the sounds of cutting, chopping, stirring while the aroma of all the dishes sat comfortably in her memory. At the age of 21, when she got married to an academic based in Cambridge, she had no idea how wide the gulf between her past and future would become.

Asma was her mother’s official taster, sometimes cheating and asking for multiple helpings of the dessert. While cooking was not something she had ever done, but her taste buds were well-developed thanks to her years of loitering in the kitchen.

25 years later, she still remembers her first Iftar in Cambridge. Her husband suggested buying her a M&S sandwich to break her fast. She had then burst out crying which led to a prompt two-hour drive to Brick Lane in London where she opened her fast, seated in her car, eating samosa and jalebi.

“I was so grateful to taste familiar food,” she says.

She put herself on task to learn cooking and eventually when she did, it became a way for her to channel her own experiences and homesickness to ensure that others did not go through it. Asma began cooking for her husband’s students and packing parcels of food during Ramadan for them. It is a practice she still continues.

Reminiscing her time in India, where the Indian accent pronounces the month as ‘Ramzaan’, she remembers that there weren’t any takers for fruits in her house. The only popular ones she remembers are guavas, watermelon and a mango variety called ‘langra’.

“My favourite recipe for Ramzaan was ‘Kachalu’ which are sliced guavas marinated with rock salt, sugar, chillies and lime juice,” she adds.

Not living in a joint family system meant smaller Iftars but her mother and her staff would cook big meals so that they all ate together.

“As the evening drew to a close, I remember the kitchen getting very quiet. The usual sounds of chopping and grinding would stop and all the staff would sit down with their plates piled up with food and wait for the call to Maghrib evening prayers from the mosque next door. Often we did not have electricity and this meant we could not hear the call to prayer as the loudspeaker in the mosque would not work. This always led to some excitement and drama, with our head cook would give the call to prayer (Azaan) then!” she smiles.

Her experience has meant that hundreds of people eat Iftar made by her, for free of course.

“I make food packages for mothers with young children in the school that my son goes to. Apart from food for the person who is fasting, I also cook simple things like pasta for the children, so that the mothers don’t have to cook after taking them home from school!”

However, a chance meeting three years ago through her husband’s colleague, led her to the Ramadan Tent, led by an inspirational 28-year-old student. It is a beautiful space in Bloomsbury Park where people come together, a student gives the call to prayer and everyone breaks their fast together. 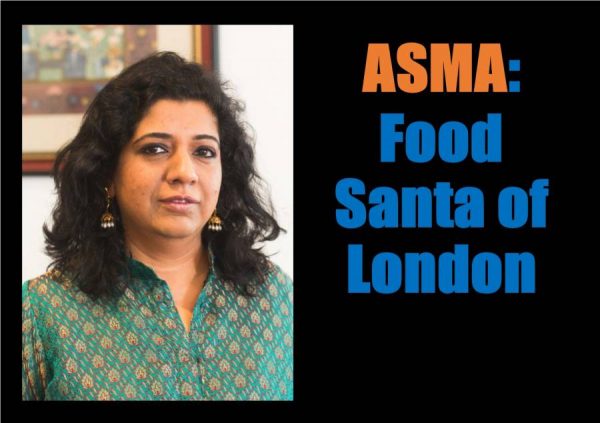 “I was so impressed with the enthusiasm and community spirit of the volunteers. I loved that the Open Iftar was not just for those fasting but also those of all religious backgrounds and the homeless too,” she adds.

Asma cooked for 150 people yesterday with a team of volunteers who helped her pack the meals and distribute them at the venue.

She shares with us one of her favourite Ramadan recipes, a rice pudding enriched with saffron and dried nuts: Saffron Kheer

Use a pot with a heavy base and boil the milk on medium to high heat. Milk can catch at the bottom very easily and it is important to stir the milk at regular intervals to ensure that this does not happen. When the milk is boiling, add the rice. Followed by the cassia bark, coconut, cashew nuts and raisins.

Once the milk comes back to the boil, lower the heat and let the milk and rice simmer till the milk has reduced to half the initial volume and the rice has softened. Add the sugar and saffron and continue to cook for a few more minutes to ensure that the sugar has dissolved. The kheer is now ready. I prefer to chill the kheer and serve it but it can be served warm too.