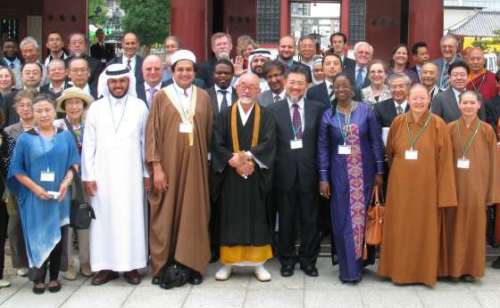 Religious leaders from around the world at a meeting in the Kazakh capital Astana showed unity to make themselves heard by politicians in a world torn apart by conflicts between civilsations.

The leaders met to prepare for the 5th triennial Congress of Leaders of World and Traditional Religions.

“It is very necessary that this Congress transcends the dialogue among religious leaders to promote another dialogue, between the religious leaders and the politicians. And it must be a dialogue between people who listen,” Kazakhstan Senate President Kasim Zhomart Tokaev said Thursday in an interview with Efe news agency.

Distinguished representatives of Islam, Christianity, Buddhism, Judaism, Hinduism, Taoism and Shintoism are in Astana for the 13th meeting of the Congress’s Secretariat.

The 5th Congress, to be held in Astana in June 2015 under the title, “Dialogue among Religious and Political Leaders in the Name of Peace and Development”, seeks to open new avenues of communication and cooperation.

“We will invite politicians who are really capable of contributing to the dialogue between different religions. Among them, of course, will be presidents and prime ministers,” Kazakh Deputy Foreign Minister Yerzhan Ashikbaev told a press conference.

Only that way, many of the leaders say, can the initiative move from words to action, which is vital to finding a definitive solution for a series of conflicts falsely characterised as having a religious purpose by the people who start them.

With Islamist extremism at the centre of world attention due to the rise of the Islamic State (IS) terrorist group, all the leaders meeting in Astana wished to make it clear that in no way could terrorism be related to one of the faiths on the planet.

“All the leaders meeting here today have emphasised that Islam has nothing to do with terrorism. That has even been underscored by representatives of Christian religions,” Yerzhan Mayamerov, Kazakhstan’s grand mufti, told Efe.

“Conflicts around the world affect more and more places, and millions of people suffer. And not for their political stances, but rather for remaining faithful to the heritage of their ancestors,” the Interreligious Council of Russia’s Roman Bogdasarov said.

“Some dishonest political leaders are bent on polarizing us,” Bogdasarov, a Russian Orthodox deacon, said.

The Congress, founded in 2003 by Kazakh President Nursultan Nazarbaev as an international discussion, raged about the advisability of going to war in Iraq. It has completed a decade as one of the most important international events of the many organised by the former Soviet republic.