We ran they hit. Big difference. Sad and dubious thought. We have one record. We got a guy out three times and it was not out. Simmons will hold that record for a very long while. Not happened ever before. Not feeling bad because always knew are bowling sucked and it did. Who needs to watch England take us to the cleaners.

Bowling Virat in the last over was a mockery. It wasn’t that we lost it is just that we didn’t even want to win there was no plan.

After we got Gayle we thought it was home and over and we have to face facts : we are a crap bowling team and today we were like scurrying ants with no idea where we were going. To not be able to defend that score in your country on your pitches means either we are idiots or we rely on karma.

Asking Kohli to bowl was an arrogance by Dhoni that I hope some journalist has to ask why?

Even if Captain cool is uncool about replying. 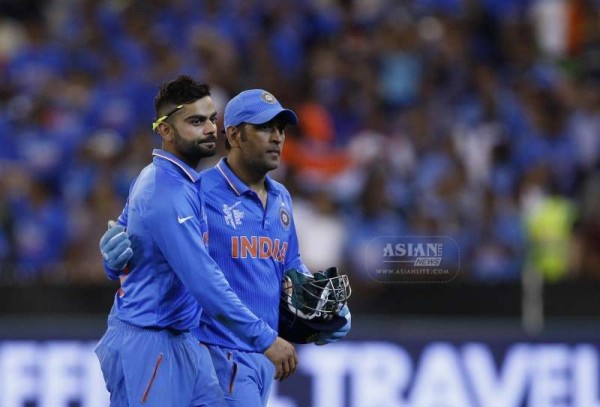 The Indian team made history in all the wrong ways. It had no idea what to do with the 192 runs and reminded me of what the Chicago Tribune once wrote in its review on the theatre page: the Marx Brothers opened their new show on Broadway tonight and they ran and ran around the stage for ninety minutes but no one knows why.

I ask you gentlemen and ladies of the jury are they not guilty of charging us tickets for a revue that promised so much and gave so damn little.

He could have been speaking about our fielding. We were at sixes and sevens…well, sixes anyway. And I don’t know I am being harsh but the Dhoni flair wasn’t just there, not a stumping, not a catch, nothing dramatic to turn the tables. He looked uncaring.

No one minds the losing, you live with it, it is the way we lost. We don’t mind losing because who needs the hassle of being thrashed by England in the finals with this convent school wet noodle attack and an attitude of ‘oops did we have a plan’ or else why did we bowl Nehra out prematurely. Come on never has India been so pathetic in defending a total.

What puzzles me is why in our own country on our own pitches with the stadium full of supporters we lost the plot. If the score had been 150 or 160 fine but 192 is a massive total. You go out there and you defend it.

Every country ‘cheats’ a little to make pitches that suit their bowlers and batsmen. What the heck stopped us from doing much the same?

Perhaps, in some funny way taking out Gayle ruined it for us…after that the ball of wool simply unravelled.

Look at this way. The kinesics of the fielding were pathetic after the batting had all four guys come to the party. The body language looked like a babe in the wilderness, kind of let’s try this path or, uh oh, perhaps that one, or why not that one.

In the Windies they call us coolies not out of racist rudeness but because of historical precedent and today we were.

We carried the burden.