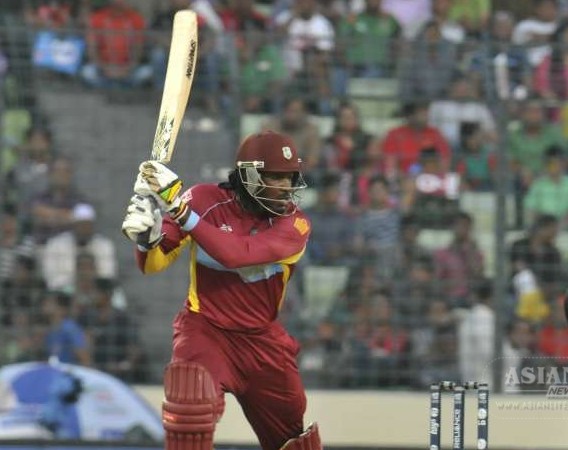 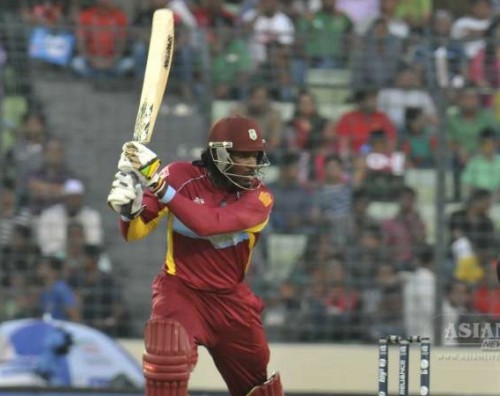 Powered by Chris Gayle’s whirlwind 215, the West Indies zoomed to 372/2 against Zimbabwe in a World Cup Pool B encounter at the Manuka Oval here .

This is the highest individual score and the first double hundred in a World Cup match with the previous best being South African Gary Kirsten’s 188 against the United Arab Emirates, way back in 1996.

A number of other records were also broken during the West Indies innings, who chose to bat after winning the toss. Gayle and Marlon Samuels (133 not out) scored the highest partnership for any wicket — 372 — in One-Day Internationals (ODI), let alone the World Cup.

In between those 297 deliveries, the left and right hand combination smashed the hapless Zimbabwe bowlers all over the park in the Australian capital.

The only respectable figures achieved by a bowler was that of off-spinner Sikandar Raza, who gave away only 45 runs from 10 overs and also managed the lone maiden of the Windies innings.

Both Gayle, who hadn’t score a century since 2013, and Samuels were not in the best of forms and started slow. The duo stuck it out in the middle to pick up one and twos and struck a boundary once in a while to keep the run rate up.

However, they picked up the pace in the middle overs when the tall and powerful left-hander looked like the Gayle of old, smashing sixes over long-on and mid-wicket.

The last 10 overs caused the maximum damage for the African side when they were hit for an unbelievable 152 runs. From 220/1 in the 40th over, the West Indies upped the ante to post a 373-run target.

In the end, Gayle scored his 22nd century and highest ODI score which included 10 boundaries and 16 sixes. The 16 sixes is also a record in the World Cup and equals the ODI record for most sixes with Rohit Sharma and AB de Villiers.

Three other batsmen have scored double-centuries in ODIs, incidentally all of them being Indians. Tendulkar was the first to score an unbeaten 200 against South Africa in 2010. The next year, Virender Sehwag smashed 219 against the Windies.

Current India opener Rohit Sharma is the only batsman with two double hundreds to his name which came against Australia, 209 in 2013, and Sri Lanka, 264 in 2014. The latter is the highest individual score in ODIs.