Germany sent out a stern warning to their rivals after a dominant 4-0 win over 10-man Portugal in the opening Group G encounter at the Arena Fonte Nova here Monday. 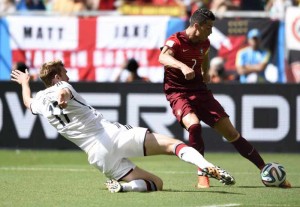 The Germans were already leading 2-0, thanks to a penalty from Tomas Muller in the 12th minute and a Mats Hummels header in the 32nd minute, when Portuguese defender Pepe was sent off for head-butting Muller in an off the ball incident.

Muller scored his second in added time of the first half and went on to register the first hattrick of this year’s finals in the 78th minute.

The Germans would have saved some energy after hardly exerting themselves in the second half.

Portugal and Cristiano Ronaldo will have a lot of thinking to do before their next match. They will have to sort out their defence as their frailties at the back was there for all to see. 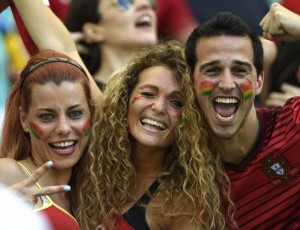 Portugal had the first shot of the goal but Hugo Almeida’s tame effort was easily saved.

Ronaldo, who scored all the goals in the win over Sweden including a hattrick in the second leg, then tested Manuel Neur from a tight angle.

Germany slowly started exerting their dominance over the proceedings and strung together some precise passes.

Sami Khedira had a golden chance to give Germany the lead in the eighth minute but his first time shot after a poor clearance from the Portugal keeper went centimetres wide with an open goal waiting.

Just minutes later, the Portugal right back brought down Mario Goetze inside the box to give Germany a spot kick, which Muller slotted in with great precision.

Germany soon started dictating the tempo of the game and looked very comfortable and patient in possession with Portugal struggling to get hold of the ball.

Hummels doubled Germany’s lead with a bullet header from a Toni Kroos corner.

Then came a moment of madness from Pepe.

The Portugal centre-back appeared to push a hand into the face of Muller. The German went down theatrically much to the annoyance of the Portugal defender, who pushed his head into Muller.

The referee had no option but to brandish a straight red card.

With ‘Ole’ chants ringing around the stadium Muller put the game beyond Portugal after Bruno Alves failed to clear his line.

The second was a much slower affair with Portugal failing to breach the opposition defence.

Germany, meanwhile, coasted along with coach Joachim Loew ringing in the changes.

Ronaldo tried his best to get onto the score sheet and almost did in the final minutes of the game but his stinging free kick found Neur in the way.