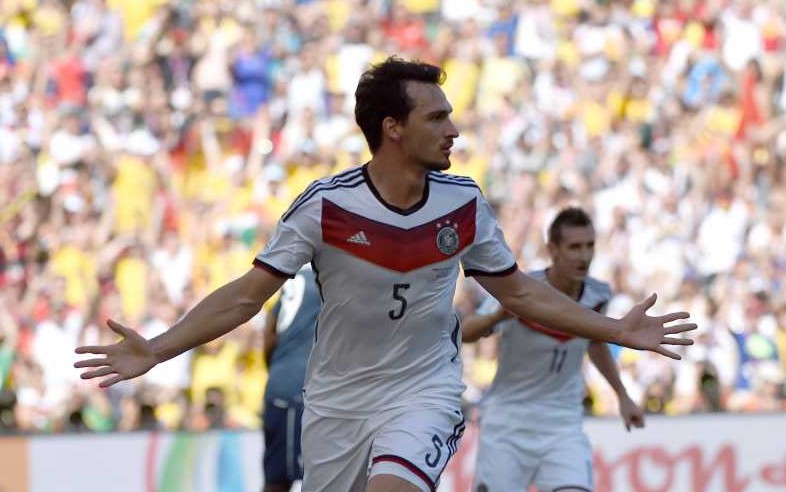 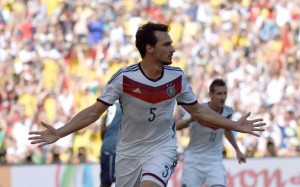 Germany booked a berth in the last four of the FIFA World Cup for a record 13th time after a 1-0 win over France at the Maracana stadium here Friday.

Matt Hummels 12th minute header was all that separated the two European giants at the end of 90 minutes.

It was a tight affair at one of Brazil’s most iconic stadiums and there was little to choose between the two sides.

Germany, who will appear in the semifinals for the fourth consecutive, started the brighter of the two but the French settled as the match wore on.

Germany seemed content with their one goal lead and played predominantly on the counter.

France did get into the German final third numerous times but the final ball was lacking. When they did manage to conjure up shooting chances Bayern Munich keeper Manuel Neur was always in the way.

The French were slow to get off the blocks and were punished in the 12th minute when Borussia Dortmund centre back Hummels brilliant header from a Toni Kroos free-kick put Loew’s men in front.

Germany continued to have the better of the possession and threatened goalkeeper Hugo Lloris’ goal repeatedly.

However, Les Blues were not without their own chances to find the back of the net.

The best of those opportunities came before Hummels broke the deadlock when Karim Benzema fired agonisingly wide of the left-hand post.

As the half wore on the French gaining confidence and showed they could get in behind the German defence.

German goalie Manuel Neur was tested first by Mathieu Valbuena and then by Benzema.

On both occasions, the man widely regarded as the best goalkeeper in the world, was up to the challenge.

The second half began in a much tighter fashion with both teams failing to hold the ball for long.

France pressing start to the second half, though, allowed Germany to counter-attack with pace.

Antoine Griezmann had a very good half and his creativity in the middle saw the French threaten the opposition goal more.

The final pass, however, let France down and Benzema had to feed on scraps.

With time running out, France threw more men forward but found themselves vulnerable at the back.

Chelsea front man Andre Schurrle could so easily have put the result beyond any doubt but his timid shot was saved by the leg of a scrambling Lloris.

France coach Didier Deschamps last throw of the dice was to bring on Arsenal striker Olivier Giroud, but there was no fairytale comeback for the 1998 champions as Germany held on to record yet another World Cup semifinal appearance.

Germany will play the winner of the other quarterfinal match between Brazil and Columbia.