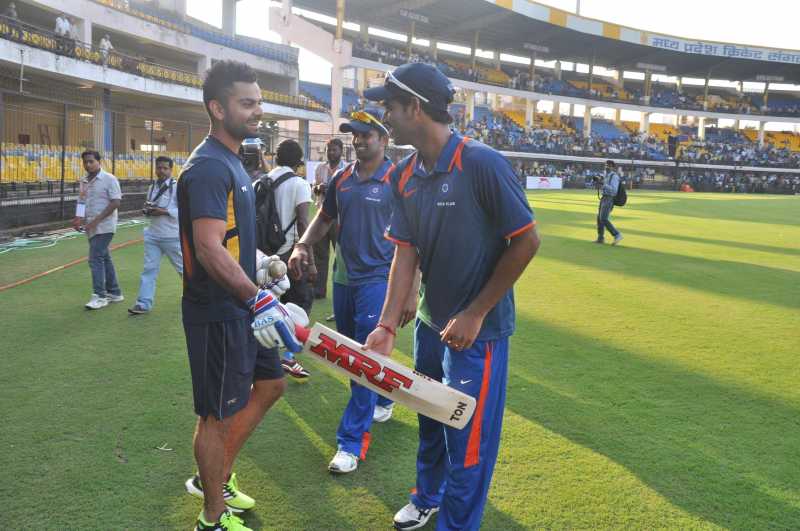 It is immaterial whether they lose the five-Test series at the Oval 1-3, 1-2, or tie 2-2, India will still return to England to play another five-match series four years from now. That’s the power of Indian money in global cricket. It is 55 years since India played five Tests in a series in England and they lost all of them as badly as the 2014 side did the last two Tests at Southampton and Manchester.

It is understandable if the 1952 and 1959 teams had gone to England with a defensive mindset, but not this one, more so having handsomely won the second Test at Lord’.

Certainly, Alistair Cook’ present side will pale in comparison with the England teams of the 50s, yet it won two Tests so easily after being 0-1 down after the first two Tests.

The Lord’ Test has proved one thing, that the Indians can negotiate the moving ball and swing the ball as prodigiously as any in English conditions. Suddenly, things have gone topsy-turvy after Lord’ with every player trying to run away from responsibility.
If the 50s teams had little excuse to cave in the way they did though they played close to 30 first-class games with a fair number of matches separating most of the Tests so that they could try out available resources, the present side can have a legitimate grouse of not playing any warmup game between the five Tests to test their bench strength.
In every series there will always be sparks of individual brilliance, as had been the case on the earlier tours as well as this one. The lack of consistency and reckless approach cannot be explained by Mahendra Singh Dhoni, though the Indian captain has his answers ready.
Unlike one of his predecessors he doesnÂ’t say that his side batted badly, bowled badly and fielded badly as if there is more to cricket than these three aspects!
When the team is on the downslide, there are very few captains who can arrest it and Dhoni is not one among them. Captains mostly wilt under pressure and even Cook looked lost at Lord’ despite having two of world’ best fast bowlers in his ranks. Indians allowed him to hide his own inadequacies as a batsman by losing the two next Tests.
A player has to have match practice before rushing him into a Test. India suffered because of the lack of side games with a squad of 18. But there is no appeal to it.
Take the case of Gautam Gambhir. He is lost to Test cricket the moment he realised his bread and butter and much more comes from the Indian Premier League (IPL) where he has patented a couple of strokes dabbing the ball left and right with no close-in cordon to check him.
In Tests, these dabs and flicks are ending up as catches behind. That’ why they say donÂ’t pick seniors if they are going to cool their heels as tourists.
He came into the third Test team without having played any serious cricket for almost two months. If Dhoni had to experiment, he could have done with Rohit Sharma, who along with Dhawan, did fairly well as opener in the Champions Trophy in England last year.
Hopes were pinned on Virat Kohli’ aggressive strokeplay and the solidity of Cheteshwar Pujara to carry the side, but the former found out the difference between pitches with life and the dead and Pujara got starts though he batted virtually as opener.
Even Murali Vijay has found ways to get out after Lord’ and Dhawan playing the moving ball to slips with a slanted bat, the misery was complete.
Ajinkya Rahane batted with some responsibility till he also found a stroke to give his wicket to now highly rated off-spinner Moeen Ali. In fact, all top-order batsmen got out to the latest icon of his community.
Rahane’ century at Lord’ went a long way in winning the Test just as Bhuvaneshwar Kumar’ two 50s and his five wickets and Binny’ match-saving 78 at Nottingham.
Dhoni is right, the batting of his bowlers acted as a smokescreen for his top-order batsmen’ failure.
Ishant Shamra bowled his heart out at Lord’ even though he credits his seven wickets in the second innings to Dhoni’ bang-in-short strategy and his injury hurt the Indians badly in the next two Tests.
Strangely, players selected essentially for their bowling like Stuart Binny and Ravichandran Ashwin did far better as batsmen. That did not save Binny his place and Dhoni says he suffered as a fifth bowler not getting proper attention.
England’ worries disappeared after Southampton and now they look like lords at the Oval. Even Cook is no longer bothered about his place in the squad. He knows he has secured it thanks to his winning team. The batsmen have done their job and the bowlers had enough to bowl.
India need not despair. A side that could win at Lord’ can win at the Oval, too, provided it can chase the ghosts away from its mind.