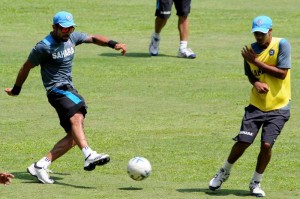 A remarkable 111-run partnership between tailenders Bhuvneshwar Kumar and Mohammed Shami gave India the upper hand after the second day’s play as England trailed the visitors by 414 runs in their first innings of the first Test at Trent Bridge here Thursday.

At stumps, England were batting at 43/1 in 17 overs with opener Sam Robson at 20 not out and Gary Ballance on 15 not out, chasing India’s healthy first innings total of 457. Shami clicked with the ball too as he scalped England captain Alastair Cook (5) early in the fourth over.

The star of the Indian innings was definitely opener Murali Vijay, who scored his fourth Test century Wednesday. Skipper Mahendra Singh Dhoni also contributed with a critical knock of 82 but the real action was provided down the order by No.9 batsman Bhuvneshwar (58) and No.11 Shami (51 not out).

Resuming the day at 259/4, India got off to a solid start as they added 83 runs in the morning session. Vijay put on another 24 runs to his tally before departing for a deserving 146.

Vijay and Dhoni saw off the first few nervy overs and added another 45 runs in the first hour to their 126-run fifth-wicket partnership, seeing the visitors comfortably cross the 300-run mark.

But soon the centurion was trapped leg before wicket by pacer James Anderson, who picked up his third and final wicket of the innings (3/123).

The skipper, however, was joined by Jadeja, who came out in a mood to score quick runs. The left-handed batsman scored 24 runs from 18 deliveries which included two huge sixes off spinner Moeen Ali (1/97) in the same over to add to two fours he hit earlier.

The duo stuck it out in the middle to make sure India lost only one wicket in 28 overs and scored at a run rate of 2.96 in the first session.

Dhoni scored his 30th half-century and was looking good for a hundred but got run out trying to go for an unnecessary run in a critical situation.

At this point, the English bowlers looked confident of wrapping up the Indian innings soon. But Bhuvneshwar and Shami played out a gutsy – and for England irritating – 10th-wicket partnership to take the visitors well past the 400-run-mark.

The duo scored their first half-centuries in Test cricket and their partnership, the second biggest of the innings, helped India score 91 runs in the second session. They frustrated the English bowlers for 38.1 overs before finally giving way to the English innings when Bhuvneshwar skied a ball which was caught by Joe Root.

The partnership was India’s second best ever for the 10th wicket after Zaheer Khan and cricket legend Sachin Tendulkar scored 133 against Bangladesh in December 2004.