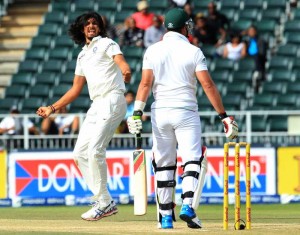 India put themselves in pole position by reducing England to 105 for four, still needing 214 runs to win, at stumps on day four of the second Test at Lord’s here Sunday.

England top order failed to get going as Indian pacers bowled brilliantly in the final session.

After losing opener Sam Robson (7) in the tea session, England lost three wickets for two runs to give India complete control of the match.

Indian pacers Ishant Sharma (2-13) and Mohammad Shami (1-20) did all the damage in the final session.

Things could have been worse for the hosts as Ravindra Jadeja had an easy lbw decision turned down while captain Mahendra Singh Dhoni put Moeen Ali’s (15 batting) catch down in the penultimate over of the day.

Earlier, a brilliant 99-run partnership between Ravindra Jadeja and Bhuvneshwar Kumar helped India reach 342 all out in the second innings giving England a 319-run target.

Jadeja smashed 68 runs off just 57 balls while Bhuvneshwar Kumar (52) too played an excellent hand to notch his third half century of the series.

The Indian duo punished the English bowlers for their lacklustre bowling and gave India a firm grip on the match.

After dismissing Jadeja, England did manage to do some damage control by quickly taking the final two wickets.

In the morning session, Murali Vijay fell five short of a deserving century while Ravindra Jadeja’s unbeaten blitzkrieg extended India’s lead to 243 runs after England had rocked them with three quick wickets.A

India made a predictably slow start to the proceedings by being extremely cautious.

Both Vijay and Dhoni left alone the balls outside the off-stump. The English players didn’t bowl all that well in the first hour but a positive outcome was that they only let India eke out 34 runs.

Dhoni batted for 86 balls for his 19, his slowest test innings when scoring 10 or more.

The Indian captain had all morning refrained from poking outside the off-stump but old habits are hard to overcome and once again Dhoni prodded at a good length ball, managing to get an outside edge that was smartly taken by Ian Bell at second slip.

Binny’s lack of experience and temperament came to the fore in the very next over as he went for an ambitious lofted shot off the bowling of Moeen Ali but was brilliantly caught by English captain Alastair Cook.

All Binny needed to do was to give company to Vijay, who was batting well, at the crease but only managed to play a shot that might spell doom for his Test career.

Jadeja and Vijay then took the attack to the English bowlers adding 32 runs off just 35 balls but a flirt outside off-stump from the Indian opener ended his commendable run at the crease.

Jadeja refused to be tied down even after England took the new ball. The man referred to as ‘Sir Jadeja’, thanks to his exploits in the domestic circuit, smashed the English pacers all over the park to put the pressure back on England.

England, who haven’t chased anything above 200 since 2008 when they beat New Zealand at Old Trafford, looked a little shell-shocked by Jadeja’s aggression.