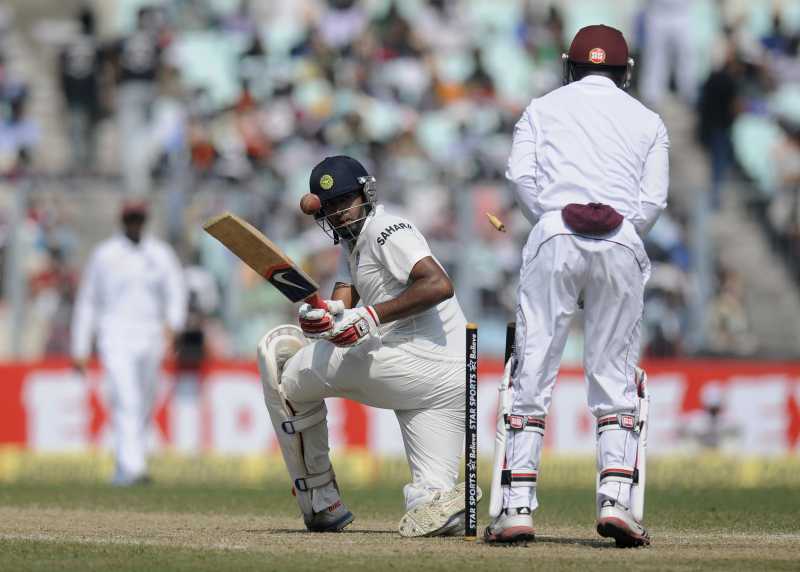 Stuart Broad starred with six for 25 as India were bundled out for 152 runs in the first innings by tea on the first day of the fourth cricket Test against England at the Old Trafford at Manchester on Thursday.

It was a miserable performance by India as six cricketers failed to open their account. The only saving grace was skipper Mahendra Singh Dhoni’s rearguard 71 and Ravichandran Ashwin’s fighting 40.

The only other Indian batsman who could get to double figures was Ajinkya Rahane, who made 24.

England pacers made the best use of the overcast conditions after Dhoni opted to bat first. Though the pitch was good for batting the conditions assisted the England seamers who got the swing right from the start. Broad was the pick of the English bowlers while James Anderson picked three for 46.

Ravichandra Ashwin, Bhuvneshwar Kumar and Varun Aaron were the other batsmen who fell for ducks.

Gambhir, who was playing his first Test in nearly 20 months, was the first to go after he fended a rising delivery from Broad and was caught by Joe Root at gully.

Rahane and Dhoni added 54 runs for the fifth wicket but pacer Chris Jordan (1/27) struck in the second last over before lunch to remove Rahane, who found Ian Bell at second slip.

Jadeja fell in the second over after the lunch break to leave India at 6/63.

Dhoni and Ashwin then added 66 runs for the seventh wicket that helped India avoid the ignominy of being skittled out for under 100 runs.

The last four wickets fell for 23 runs as the English pace attack put on a clinical show to wipe out the tail.