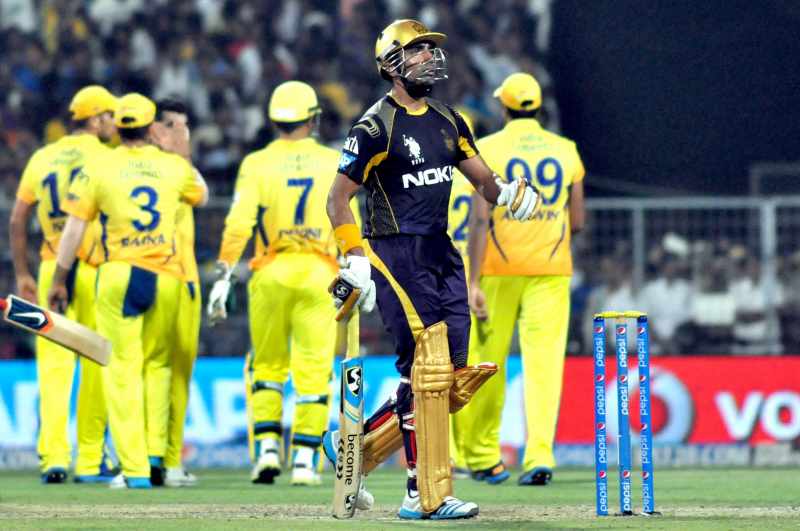 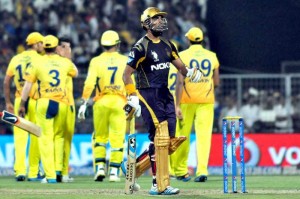 Continuing their dream run, Kolkata Knight Riders moved closer to the knock-out round by galloping to a eight-wicket win over Chennai Super Kings as their batsmen led by Robin Uthappa put up a sparkling show in an Indian Premier League match here Tuesday.

Playing their first match at the home ground Eden Gardens before a near capacity vociferous crowd, the Knights chased down CSK’s 154/4 with two overs remaining. For the Knights, Uthappa top scored with blistering 67 while allrounder Shakib Al Hassan played a cameo of 21 ball 46 to take the Knights home at 156/2 .

With their fifth win on the trot, KKR have nearly sealed their berth for the playoffs.

They now have seven wins from 12 matches and are currently ranked fourth in the points table.

KKR’s chances for the knockout round were earlier brightened following the Sunrisers Hyderabad’s seven-wicket win over Royal Challengers in the afternoon game.

KKR started off in a blazing fashion with opener Uthappa creaming the inning’s very first ball for a four, but was lucky to get two “lives” when his edge off Ben Hilfenhaus was spilled by R. Ashwin, while Suresh Raina failed to latch on to a difficult chance. Pacer Mohit Sharma was the unlucky bowler.

The 64-run first wicket partnership was broken in the seventh over when skipper Gautam Gambhir 21 (20b 3×4) was castled by Ishwar Pandey.

In their last seven outings, Gambhir and Uthappa have stitched two century and three half-century partnerships for the Knights.

Dhoni continued to juggle his bowlers but could not rein in Uthappa who hit Ravindra Jadeja for a boundary past the keeper to notch up yet another half century.

Jadeja, however, had the last laugh when Uthappa, (39b, 10×4, 1×6) trying to clear long off, chipped out to F.du Plesis who accepted it gleefully.

With just 56 required of the last eight overs, Manish Pandey and Hasan played sensibly but scoring at a brisk rate as the Knights moved closer to victory.

While Pandey (18 not out, 28b) preferred to play anchor, Hassan (46 not out; (21b, 6×4, 2×6) was the aggressor as he hit pacer Hilfenhaus for a six and two consecutive fours in the 17th over, before sending Sharma for a four to bring in the victory.

McCullum returned when he skied a Sunil Narine delivery to be smartly caught by Surya Kumar Yadav running in from long-off.

The in-form Raina though continued unfazed as he hit leggie Piyush Chawla for two consecutive sixes and a four to score yet another half century for the Chennai outfit.

The visitors cruised past 100 in the 15th over, but the 62-run third wicket partnership was broken when du Plessis was run out by Chawla in the 17th over with the score on 122/3.

Soon after, Raina holed out in the deep trying to hit Chawla out of the park.