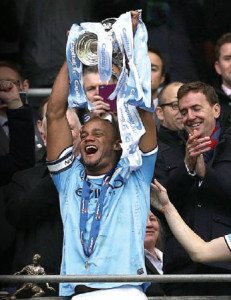 Manchester City were crowned Premier League champions for the second time in three years by beating West Ham United on the final day of a dramatic season.

Needing only a point to finish ahead of Liverpool on goal difference, a 2-0 win gave boss Manuel Pellegrini the title in his first season in charge.

Vincent Kompany’s 49th minute strike was the 156th goal of a dazzling season which saw the great entertainers complete a league and Capital One Cup double.

“It’s not just winning titles that is important, but it’s the way you win them,” Pellegrini explained in his post-match press conference.

“It doesn’t matter who you play, maybe it’s easy to score a goal and then go behind the ball. We have players to play on the counter-attack, they are fast and technical, but again, I’m not criticizing the way other teams play, but if it was me, I wouldn’t be happy to win in that way.

“The fans enjoyed the whole season – we broke the records for the most goals scored by any team in England. It is the way we must play with the quality of players we have.

“Of course I am proud to manage this group of players and this club. It’s a great honour to be the first manager from outside of Europe to win the title but I’m not the most important person.