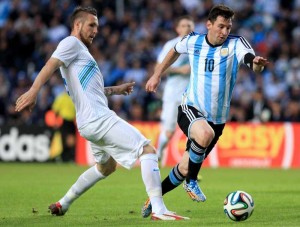 Lionel Messi has revealed his 27th birthday wish is to lift the World Cup winner’s trophy at the Maracana stadium July 13.

The Argentina and Barcelona forward, who turned 27 Tuesday, took to Facebook to thank fans for their congratulatory messages, reports Xinhua.

“Thanks a lot for all your birthday wishes,” Messi wrote.

“My perfect gift this year would be to win the World Cup, but first we focus on (Wednesday’s) game (against Nigeria) and topping the group.”

Messi has more than 59 million fans on the social media site.

He took part in the Albiceleste’s light training session at Porto Alegre’s Beira-Rio stadium Tuesday but spent most of the day in the team’s hotel.

He also posted a picture on Facebook with a new pair of boots.

Argentina are currently top of Group F with two wins from as many matches.

Victory Wednesday would set up a round of 16 clash against the Group E runners-up July 1.