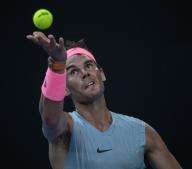 Although it was far from easy, all the big names like Rafael Nadal, Grigor Dimitrov and Caroline Wozniacki made it through to the quarter-finals on Sunday, with the Day 7 action providing some great contests for the 63,000 fans in attendance at the Australian Open.

With a final score of 6-3, 6-7 (4-7), 6-3, 6-3, you might think that world number one Nadal had a comfortable 4-set victory over Argentinian Diego Schwartzman. However the Spaniard was pushed to the limit during the match and had to fight hard for every game, reports Xinhua news agency.

In the end, the precision of the 16-time Grand Slam winner, was enough to get Nadal into the remaining eight.

“He is a great player in all aspects and he was serving well,” Nadal said in praise of Schwartzman.

“This was the first big match I have played in 2018 and I was able to fight until the end.”

“A match like this probably helps because it builds confidence in knowing that I can resist almost four hours on court playing at a good intensity.”

It was a similar story for world No.3 Dimitrov, when he faced home crowd favourite Nick Kyrgios.

But the gripping, nail biting battle, was made even more tense when officials controversially called the Australian for several foot faults.

“Playing against Nick is always tricky. He deserves a lot of credit. He fought really hard,” Dimitrov said after the win.

In the other matches, sixth seed Marin Cilic got past Pablo Carreno Busta in four sets and England’s Kyle Edmund continued his dream run at the tournament by overcoming Andrea Seppi. Edmund won 6-7 (4-7), 7-5, 6-2, 6-3 to book a place in the last-8 round in a Grand Slam for the first time.

“This is a beautiful (landmark) and I hope I can gather three more here,” Cilic said after the match that lasted nearly three and a half hours.

In the women’s bracket, world number two Caroline Wozniacki cruised her way into the quarter-finals with a 6-3, 6-0 win over Magdalena Rybarikova.

Wozniacki, a former world No. 1, had not reached the last-8 round since 2012 when she lost to now retired Kim Clijsters of Belgium.

“Six years ago. It’s so long ago. All I can say is that I think I’m in a good place, I think I’m hitting the ball well and everything’s been going well in the last year-and-a-half. It’s been good,” Wozniacki said after the win.

“It’s more pressure but it gives you confidence,” Ukrainian star Svitolina said in reference to her possibly winning the Australian Open title as she is one of the favourites.